Jasper is a 26-year-old astrophysicist and Amir's husband. He has blond hair combed to the right, a mustache, a beard, and black glasses over his green eyes. He wears a white shirt with baby blue stripes and black buttons under a silver jacket. Additionally, he sports a brown strap with two buckles, a brown necklace with beads connected to a brooch of Saturn, and two pins of a golden telescope and a constellation on his left lapel.

Per Amir in The Bloom of Doom, it is known that Jasper uses beard oil.

In his first suspect appearance, it is discovered that he knows how to fight, takes sleeping pills and is right-handed.

In his minor appearance in Lashing Out, it is revealed that he eats instant ramen.

In his second suspect appearance, it is noted that he has a cat, wears vegan shoes and eats donuts.

In his minor appearance in Blaze of Glory, Jasper is seen wearing a white buttoned shirt, adorned with flowers, blue suspenders and a blue bow tie with floral designs.

In his minor appearance in It All Comes to a Head, he...

After arresting Elaine Seabrook's killer, Jasper proposed to the player that they sneak in the satellite crash site to see what was going on. He said that if they got caught, they would pretend not to know. When they were near the site, a security guard pointed his gun at the two of them, telling them not go any nearer.

Jasper reasoned to the security guard that they were just there to see the satellite and that it would not mean any harm after a year. The guard explained that the site had radiation leakage because the satellite's nuclear reactor onboard broke during the crash. He then handed the two a flyer explaining the satellite crash before telling them to leave.

After that, Jasper joined the player in finding Jones' invitation of the player to his house party. Later that night, Jasper accompanied Amir to the party, still disappointed at not being able to see the crash site up close.

After arresting Greg Gibbs' killer, Jasper came to the precinct carrying Amir, who had been injured during an aftershock. Jasper and the player then requested Martine's help to treat Amir's injury, who suggested that they searched Dr Gibbs' clinic to find a stock of medication as her supplies had been depleted by the earthquake. After finding the necessary medication, Martine was able to treat Amir. Jasper and the player then checked up on Amir, who thanked them for helping him recover and invited the two to dinner.

After arresting Sam Chey's killer, Jasper arrived at the precinct in order to ask the player to help him find a spy bow tie for Amir as a gift for their three-year anniversary. After the player acquired the bow tie and retrieved Jasper's anniversary card, Jasper was able to surprise Amir with a picnic and the two proceeded to celebrate their anniversary.

After arresting Jordan Coprolite's killer, Jasper assisted the team with their analyses. Cathy enlisted Jasper's help in understanding the conversation occurring in Louis Leroux's interview tape with DreamLife. Jasper revealed that the conversation indicated that whatever DreamLife was hiding could not be a satellite. Later, after Jones and the player sent him some blueprints, Jasper concluded that DreamLife was hiding a meteorite, but did not know what the company was doing with it.

Jasper became a suspect after Amir told Jones and the player that he found his DNA on the teacups which were found in Rupert's workspace, meaning that he was under the dome with Rupert. After the team came to ask him about what he was doing in the dome with Rupert and why he did not tell Amir about that, Jasper revealed that Rupert asked to see him. He explained that he did not tell Amir anything because he knew it was dangerous. However, he swore that Rupert was okay when he left the dome.

Later, a drunken Amir started accusing him of killing Rupert after he had a look at Jasper's computer and found out that DreamLife had offered him a job. The team then came to ask Jasper, who revealed that he turned their offer down and said that he never intended to accept it. However, he figured that an interview might be an opportunity to snoop inside the dome, so he went to the interview without telling anyone. In the end of the conversation, Jones hoped that Jasper was not responsible for killing Rupert.

Jasper was found to be innocent after the team incarcerated Dr Catherine Kelly for Rupert's murder.

During the murder investigation of Barb Bellamy, Jasper came to Amir's lab to apologize Amir for lying to him. However, Amir rejected his apologies and told Jasper to leave the lab as he had work to do.

Soon after arresting Barb's killer, Jasper came to station to talk with Gabriel and the player about Amir, who had not been home since Rupert's death. Jasper said that he was really concerned about Amir, but Amir would not talk to him because he thought Jasper was lying about turning down the DreamLife's job offer. Later, after being able to find Philip Hoover's notes on Jasper during his application interview, which were the proof that proved Jasper really turned down the job offer, the team showed the notes to Amir, who then stopped pushing Jasper away and forgave him.

After arresting Wendy Stokes' killer, the team went back to the experiment room where Wendy was killed and found some documents regarding the meteorite, which they got to Jasper as he's an astrophysicist. There, Jasper was able to find out that the Grimsborough earthquake was caused by DreamLife, prompting the team to talk to Mayor Joe Warren about DreamLife's connection with the earthquake.

After arresting Zoe Kusama's killer, the team learned that Zoe had been given Ad Astra's superhuman serum, prompting Gloria and the player to have Jasper review Zoe's autopsy report. After reviewing the report, Jasper concluded that Zoe's telekinetic powers were an unintended side effect of the serum.

After arresting Christian Bateman's killer, Amir took Jasper to their favorite restaurant, where they reminisced on their first kiss, as well as many other countless memories. Amir then proposed to Jasper, who gladly accepted. The two then kissed as Jasper thanked Amir and the player for forging a ring out of bocryx, his favorite metal.

After arresting Dr Henry Liu's killer, the team found a stack of documents belonging to Denise Daniels regarding the meteorite. They sent the documents to Jasper, who said that Denise had discovered a way to catalyze an earthquake even more powerful than the one caused by DreamLife, although he did not know which way she was going to use.

Jasper became a suspect in the theft of the meteorite core (i.e. the earthquake catalyst) and the murder of Jon Benson after seeing a photo of a younger Jasper interning at S.A.R.A. proving Denise thought that he owed her. Jasper admitted that he had taken the internship straight after college, not knowing Denise's true nature all those years ago. He also told her that Denise had merely asked him to check a physics equation. He then told the team that he had not gone near S.A.R.A. in months.

Later, the team found a Berzelium book in the crime scene, proving that he had gone there. The team confronted him about the lie, and he said that he had only gone to S.A.R.A. that day to study the meteorite to help the team find Denise and stop the earthquake.

Jasper was found to be innocent when the meteorite core thief and the killer turned out to be S.A.R.A. lawyer Martin Davenport. Soon after the trial, the team met up with Jasper at the nuclear reactor control room after learning from Martin that Denise's second accomplice at the site had placed the core in the reactor and started the reaction to cause the earthquake. There, the team found a laptop running the program to initiate the reaction. The team entrusted Jasper to stop the reaction, which he successfully did by introducing an anomaly.

Five months after Denise and her neohumans were defeated, Jasper and Amir had their wedding, officiated by Ramirez. The entire team (and their plus ones) attended the event.

At the request of the police, Jasper performs analyses involving astronomy and astrophysics. He informs the team of the results of his analyses after a certain amount of time or a speed-up process using Criminal Case Cash. His task-wait rates will vary depending on the difficulty of the task, but they all cost 1 Criminal Case Cash per 30 minutes.

Below is the list of analyses Jasper performs throughout the course of the game: 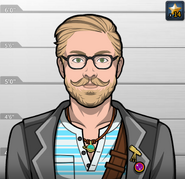 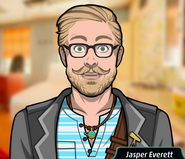 Jasper, as he appeared in Flatline (Case #7 of The Conspiracy).

Jasper, as he appeared in Hot Mess (Case #11 of The Conspiracy). 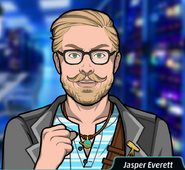 Jasper, as he appeared in Muddying the Waters (Case #25 of The Conspiracy). 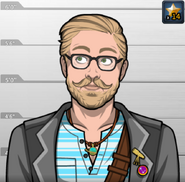 Jasper, as he appeared in Things Fall Apart (Case #32 of The Conspiracy). 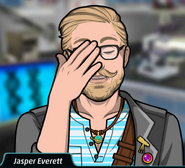 Jasper, as he appeared in A Rock and a Hard Place (Case #33 of The Conspiracy). 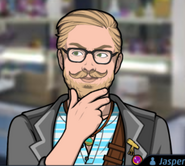 Jasper, as he appeared in In Cold Blood (Case #35 of The Conspiracy).

Jasper, as he appeared in Lashing Out (Case #42 of The Conspiracy).

Jasper, as he appeared in A Crime Like No Udder (Case #44 of The Conspiracy).

Jasper, as he appeared in A Pointy End (Case #45 of The Conspiracy).

Jasper, as he appeared in Out of Breath (Case #51 of The Conspiracy). 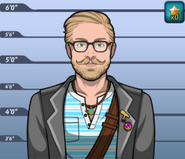 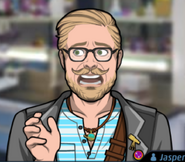 Jasper, as he appeared in Extinguished (Case #58 of The Conspiracy).

Jasper, as he appeared in Blaze of Glory (Case #60 of The Conspiracy). 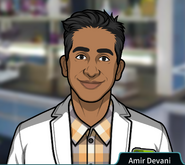 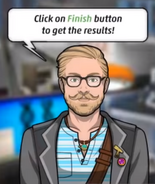 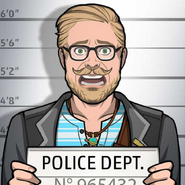 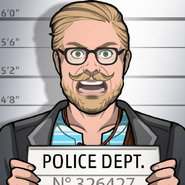 Retrieved from "https://criminalcasegame.fandom.com/wiki/Jasper_Everett?oldid=547028"
Community content is available under CC-BY-SA unless otherwise noted.