Jason was the prime minister of Canada. He had blue eyes and neat brown hair. He wore a navy blue suit over a powder blue shirt and a blue tie. He also had two crossed flag pins: one of Canada, and the other of the Unified Nations.

Chief Ripley said that she would be arranging a meeting with Prime Minister Stone as soon as she said that the Bureau would be heading for Montreal to meet El Rey. She said that they needed to show him BØB's (the satellite) hard drive in order to prove that SOMBRA was a real and imminent global threat.

Jason was found in the skybox with choking marks around his neck. Carmen concluded that he was choked while the crowd was wildly cheering after Canada scored a goal in the hockey match. According to Grace, the lacerations indicated he was strangled with some kind of garrote wire, killing him in seconds. However, she was able to find a brown substance on Jason's neck, which turned out to be gravy. It also contained traces of melted cheese, which are the common ingredients in the Canadian dish poutine, meaning his killer ate poutine.

Mid-investigation, Elliot received a transmission revealing that Jason was killed by El Rey, the leader of SOMBRA.

After investigating the victim's terrace one more time, Carmen and the player found a bloodstained watch, which was later sent to Lars, who confirmed that the watch was in fact a garrote watch which contained a garrote wire, meaning it was the murder weapon. He was able to gather DNA belonging to the killer, and from that DNA he determined the killer had green eyes.

Jonah was assigned as Jason's security detail by the Bureau but he had let his guard down after receiving a text from Marina. Jason had invited goodwill ambassador Hector Montoya to watch the Canada vs UK diplomatic match to foster a spirit of peace. He also invited Prince Rupert to take part in the match; he played for the first faceoff before joining Jason and his guests. Jason had also recently met with Ronin Ozawa to discuss the information he was selling. Mossad also assigned Asal Hawaa to protect Jason no matter who she needed to "strike" to do so.

The killer, as well as the current leader of SOMBRA, turned out to be Hector.

Hector quickly admitted to being El Rey, reminiscing about how his parents were killed by a fire when he was a child. Given that he believed that they were weak and that he was strong as he survived, SOMBRA's ideology appealed to him greatly. Arsenio Castillo gave him the position of El Rey when he stepped down. The team concluded that Hector strangled Jason with a garrote watch to prevent his discussion with the Bureau. After Carmen said that SOMBRA's reign had ended, Hector revealed Chief Ripley was helping SOMBRA since its start.

Hector was placed in custody while the team investigated his claim. Ripley said they would have to find the truth out on their own and that she would step down from the Bureau and have Ingrid take her duties. Carmen and the player talked to Hector, who directed them to the sky box for clues. Jonah then offered to help the player search for Jason's stolen files in his apartment. Afterwards, Judge Adaku sentenced Hector to life in prison for the murder and SOMBRA's crimes. 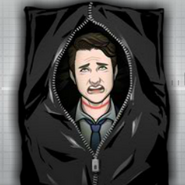 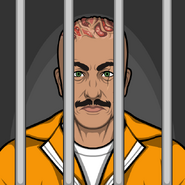 Hector Montoya, Jason's killer.
Add a photo to this gallery

Retrieved from "https://criminalcasegame.fandom.com/wiki/Jason_Stone?oldid=495525"
Community content is available under CC-BY-SA unless otherwise noted.