Jason Palms was a suspect in the murder investigation of Chief King's old friend, Stuart Huckabee, in A Brave New World (Case #52 of Grimsborough).

Jason is a 32-year-old conspiracy theorist who has black hair in a cornrow style and a goatee. He wears a gray striped shirt with a black shirt printed with "the truth is out there." underneath it. He also has an alien and UFO badge pinned on his right chest.

Jones and the player found Stuart Huckabee's message found at the Cavendish Lighthouse, decoded the message through Alex, and found Stuart wrote the message for Jason Palms in a strange language. The team hurried to talk to Jason about Stuart's message.

Jason told the team that he begged Stuart to stop probing the Crimson Order since the Crimson Order did not want their secrets outed to the public. The team did not believe Jason's riff-raff until later on the investigation, in which Herman Cavendish politely gave a 4-century old gold chalice, revealed the insignia, analyzed it through Alex, and confirmed that the Crimson Order existed since Grimsborough was discovered by the Pilgrims. The team wanted to approach Jason to confirm that he was right. 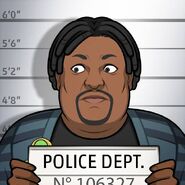 Retrieved from "https://criminalcasegame.fandom.com/wiki/Jason_Palms?oldid=408431"
Community content is available under CC-BY-SA unless otherwise noted.