Dr. Jarvis Donne was the "killer" of "weird guy" Randolph in No Place Like Home (Case #45 of Pacific Bay).

Jarvis is a 45-year-old scientist who works for the army. He has a PhD in biology and specializes in alien autopsy. He wears a surgical uniform with a clearance badge for Area 61 and night vision goggles on his head. It is known that Jarvis eats candy, had read Truth About Aliens and has an allergy to latex.

Dr. Donne was first interrogated by the player and Amy after they found an article of him about alien autopsies. When asked if any of his research involved the victim, he replied saying yes and that he and Randolph became friends while he was at Area 61. He said that Randolph escaped from the Army at a crucial point of his research, to which Amy replied by saying that he made Randolph sound more like a prisoner than a friend. Jarvis then said that the victim was one of the most trusting aliens he knew, which frustrated Amy since she thought Randolph was just talking crazy.

Jarvis was spoken to again after the team found his research notes on Randolph. He was studying the victim's physiology as it was his specialty. He intended to hopefully enhance human lives with that research on Randolph. When Amy wondered how far Jarvis may have went to complete his research, he replied saying he could not get too friendly with the victim since being a scientist, he had to maintain a professional distance.

In the end, Dr. Donne was proven to be Randolph's killer. Jarvis claimed that Amy and the player were making a false arrest when the twosome approached him with evidence of his guilt, prompting Amy to assume that Jarvis autopsied Randolph in a Rhine Canyon themed amusement park, to which Jarvis replied that it was not up to his professional standards. Amy continued to berate Jarvis, which made him swear that he never harmed Randolph under any circumstances. Jarvis then defended himself by telling Amy and the player that Randolph was alive in spite of the alien losing his human disguise due to him dissecting "the most harmless person" to death. All Jarvis wanted to do was to allow the real Randolph to get out of his human body so that he could return back to his planet Krep-9 as his true self. Jarvis helped Randolph get out of his human body, but due to the player's assumptions of murder, he instructed the alien to hide in the theme amusement park to ensure he sustained no further injuries. Jarvis pleaded with Amy and the player to believe his reason to free the real Randolph from his human shell, but Amy did not care, so she stepped aside to allow the player to ship the Area 61 surgeon to court.

In court, Jarvis stated before Judge Dante that neither Amy nor the player believed his story even though he actually freed Randolph from his human shell so that he could reunite with his Krep-9 brethren and return back home. Judge Dante admitted to Jarvis that his alien teacher from planet Baguetron would not survive an autopsy as opposed to Randolph, but opted to side with Amy and the player as he gave the surgeon 10 years of hard time in spite of the amount of defense Jarvis had to throw to justify such murder. Amy was aggravated by the hearing since Jarvis proved to be a hard man to indict although Judge Dante proved once again that the law is above everybody.

His testimony turned out to be true as revealed in the Additional Investigation, but whether his sentence was revoked is not known. 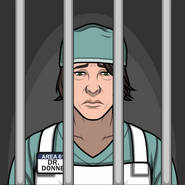 Jarvis, sentenced to 10 years in jail for the autopsy of Randolph. 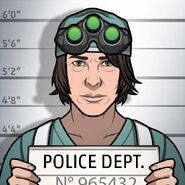 Retrieved from "https://criminalcasegame.fandom.com/wiki/Jarvis_Donne?oldid=500118"
Community content is available under CC-BY-SA unless otherwise noted.