James Smith was a suspect in the murder investigation of junkie Dan Broke in The Dockyard Killer (Case #4 of Grimsborough).

James is a 25-year-old barge driver with long blond hair underneath his beanie hat and green eyes. He is seen wearing a white vest and a gray hoodie. It is known that James is right-handed.

James was the person who discovered the corpse of Dan Broke and reported it to the police. Jones and the player interrogated him and he stated what he saw and said that he was a barge driver. He also told the police that he'd found a drug package at the main crime scene, which finally led Jones and the player to arrest the killer, Bulldog. 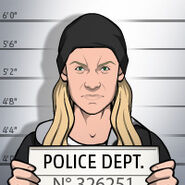 Retrieved from "https://criminalcasegame.fandom.com/wiki/James_Smith?oldid=439519"
Community content is available under CC-BY-SA unless otherwise noted.