James is a hunter with long black hair, brown eyes and beard.

In his first appearance, James is 36 years old. He wears a pale blueish-white shirt underneath a stitched burgundy cardigan and carries a hunting rifle on his back. It is known that James loves theater, has sewing skills, suffers from heartburn and owns a husky.

In his second appearance, James ditches the badge and has scratches on his right cheek and a mud stain on the right side of his shirt.

In his third appearance, it is revealed that he is left-handed.

In his fourth appearance, James wears a Dog Pageant badge and has a scar of a dog's bite on his neck. It is noted that he uses ether.

In his fifth appearance, James is now 41 years old. He is seen having some gray streaks on his hair as well as some wrinkles on his face. Additionally, he wears a yellow buttoned shirt underneath a stitched dark red cardigan and is seen carrying a hunting rifle on his back. Furthermore, there is blue stain on his outfit. It is learned that he uses dental floss, wears hiking boots, uses insect repellent and owns a German Shepherd.

In his sixth appearance, he sports some scratches on his left cheek and soot stains on his clothes. It is determined that he has a cough, wears running shoes and eats Take It Cheesy snacks.

James is a dangerous hunter who lives by himself, deep in a forest, and hates other people entering it. He was also accompanied by his husky before it was killed.

James was called in by Jones and the player after they found the paw print of his dog in an overgrown garden. When asked about it, James told the team that maybe he and his dog had passed through that abandoned garden while hunting. After Jones informed him about the victim, Wilfred Turnscrew's death, James said that the writer should have died a long time ago ever since he started publishing "trashy" novels. He also said that, because of Wilfred's books, hundreds of tourists had started to visit the forest (where James always hunted) and pollute it with their littering. For this reason, James was glad that Wilfred had died.

James was later detained after the team found his skinning knife in the local museum (where the victim's body was found). When the team was about to arrest James, the hunter admitted that the knife belonged to him, but also claimed that he had lost it a few days ago. He further explained to the team that he had just beaten up the victim to unconsciousness in the abandoned garden because Wilfred taunted James saying that he was going to buy out the forest and then, he had left. However, the team did not listen to him and detained him, but was eventually exonerated of all criminal charges when Cornelia Trent was indicted for Wilfred's murder.

James returned as a suspect after the death of Mary Gray. After analyzing a glove which the team found in the town exit, Grace discovered that the killer owned a dog. The team then remembered James since he owned a dog and always used to hang around the outskirts of the town, and went to have a chat with him. When asked if he knew the victim, James replied that he had seen Mary a few times in her stall and that he had seen the victim with someone else the day before her death. He said that he had seen the two of them go towards the outskirts of the town and that the mysterious man was acting like if Mary was his prey. Unfortunately, James had not seen that man's face, so he could not help the team further.

No Smoke Without Fire

James made his third appearance after the death of Connor Sullivan. He lived near the camp where the chief, Connor, and his group of scouts were attending the annual Scout Survival Camp. He was interrogated after one of Connor's young scouts, Ayden Young, told the team that he had seen the hunter fighting with the victim the previous day and that they had shouted and almost hit each other. When questioned about this incident, James replied that Connor had started a fire in a restricted zone and that he spotted it and told Connor to put it out, but the victim refused and then broke James's "No Fire" sign to pieces. James also told the team that he would have surely hit Connor if the kids were not watching.

Later, James was in big trouble after the team found a bloody knife (which turned out to be the murder weapon after the analysis) inside his shack. When asked about the knife, James claimed that it was his and that he had been looking for it since the last two days. The team then told him that this was the same knife which was used to kill Connor. After hearing this, James was shocked and said that someone was framing him, stating that nobody liked him there and that everyone was scared of him just because he was such a loner. When told about the chocolate-stain on the knife, James angrily replied that he was allergic to chocolate, and told the team that they could check his medical records if they did not believe him, in order to prove himself innocent.

James had participated in the annual Dog Pageant competition. He was interrogated after the team found a chew bone with his husky's bite marks on it, right next to the victims' (Molly Robinson and her dog, Poochikin) bodies. When questioned about this, James told the team that he was in the Dog Pageant Area at the morning for one last training session with his dog, and also explained to them that he had got the bone as a reward for winning the obstacle course. It was also discovered that James found the abandoned husky as a puppy and for saving the puppy's life, the husky would live with James for at least 10 years.

Later, Margaret Littlewood, one of the participants, had poisoned James' husky, along with the dog of another participant named Gertrude Piccadilly. Before doing that, Margaret had also poisoned the dog of Molly, but unfortunately, both Molly and her dog ate the poisoned cupcake and died. Margaret had also poisoned Officer Jones, who survived due to his youth. In spite of his solitude premise, James felt that his husky did not deserve to die just because of a pageant, in which Margaret already created a negative impact on the Grimsborough Dog Pageant, and even if he had to confront the people in the city (much to his discomfort), he was told by Ramirez to attend the Dog Wake in the honor of a pet he took care of for a decade.

James needed a tie, but he could not find it and in spite of him having it in his premise, he never used it up until now, but the team found the tie shredded to pieces in which it was pieced back together in no time. James was relieved to have his tie back, but Ramirez felt that James needed to dress up more "formal-like" since he discouraged usual dressing at events such as a wake and a funeral, so the team got James a black suit to wear for the wake.

James became a suspect once again after Jones and the player investigated the DreamLife dome's security checkpoint and found his dog, Leonard. After the team gave Leonard back to James, they informed James of Dr Ernesto's death. However, James told the team that he did not know anything about this as DreamLife always kept a lot of secrets to themselves. In the end of the conversation, James told the team that he was grateful to the dome because it protected his forest from the radiation, although it was annoying at first.

James was interrogated again after the team found a keep out sign with the victim's face drawn on it, saying "Stay out of my forest!". After concluding that James was the one who made that sign, the team came to confront him. When being asked about it, James said that Ernesto made his life a nightmare by coming to the lake everyday, running tests on the water and making it undrinkable. James was then angry and told the police that the forest was his home, and scientists from DreamLife like Ernesto must be stopped.

James was found to be innocent after Zoe Kusama, Jones' girlfriend, was incarcerated for Ernesto's murder.

James became a suspect for the sixth time after Jones and the player found his clothes by the getaway van. He told the team that he had gone skinny-dipping in the river when he saw the van revving over the embankment. Jones informed James that a child had been kidnapped, prompting James to tell them that he had heard gunfire.

James was spoken to again about Carter's toy being covered in his dog's drool. He explained that he often crossed paths with Carter in the woods and that Carter adored Leonard. Jones then suggested that James used his trust to help kidnap Carter, which James denied.

James was found to be innocent for the sixth time after the team incarcerated Mandy Pregodich for Jake's murder. 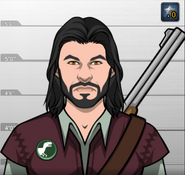 James, as he appeared in Anatomy of a Murder (Case #24 of Grimsborough). 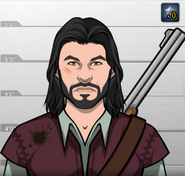 James, as he appeared in The Lake's Bride (Case #27 of Grimsborough). 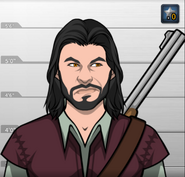 James, as he appeared in No Smoke Without Fire (Case #29 of Grimsborough). 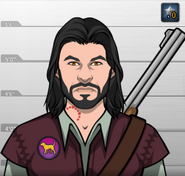 James, as he appeared in Dog Eat Dog (Case #31 of Grimsborough). 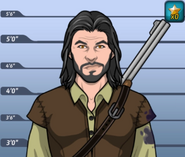 James, as he appeared in Death in My Hand (Case #34 of The Conspiracy). 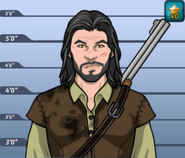 James, as he appeared in Running Scared (Case #55 of The Conspiracy). 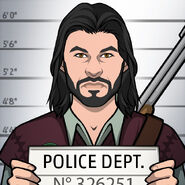 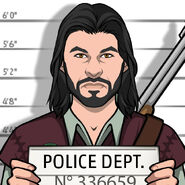 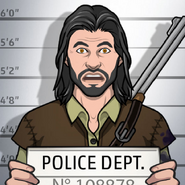 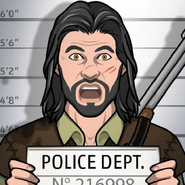 Retrieved from "https://criminalcasegame.fandom.com/wiki/James_Savage?oldid=474693"
Community content is available under CC-BY-SA unless otherwise noted.