James Parker, acting as a minor character in Criminal Case, appeared during the events of Up in Smoke (Case #50 of World Edition).

James was Sandy Turner's driver. He had short black hair and a mustache, and wore a black suit over a white undershirt and black pants. After the bombing, he was taken to the hospital, where he wore a hospital gown and had a bandage wrapped around his head. He had severe burn marks and wounds, and required an oxygen mask for sustenance.

After Sandy finished his speech at the USStay rally, James drove him towards Lombard Street, where they were caught in an explosion. Next to Sandy's body, the Bureau found a badly injured James, who was taken to hospital and placed in an intensive care unit. The team deduced at the crime scene that the bomber had targeted Sandy and James was only collateral damage.

Later, James woke up from his coma, which prompted Carmen and the player to talk to him about Sandy's murder. James used his little strength to direct them to the New Springs Growhouse before falling unconscious again. Even later, the team learned from Dupont that James succumbed to his injuries and died. 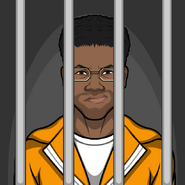 Terrance Williams, James' killer.
Add a photo to this gallery

Retrieved from "https://criminalcasegame.fandom.com/wiki/James_Parker?oldid=441678"
Community content is available under CC-BY-SA unless otherwise noted.