James Marsh was a suspect in the murder investigation of journalist Rachel Priest in The Secret Experiments (Case #21 of Grimsborough).

James is a 63-year-old army general who wears an army cap with four stars on it. He has green eyes and a black mustache. He wears a light brown army suit with a chemical stain on it and the letters, "U.S." written on the two sides of his collar. Underneath his suit, he wears a white shirt with a dark brown tie on it. It is known that James wears office shoes.

James was called in when Jones and the player found Rachel's research files, which were filled with threats from the general. Later, when the team was searching Alden Greene's desk, they found Rachel's USB stick inside a cryptex, which contained lots of incriminating information about General Marsh. From it, they learned he was trying to develop a super soldier serum for the army, which promoted excessive bone growth that turned men into literal monsters (e.g. Drake Ribbs). However, once the army learned of his dangerous human test trials, they ordered James to terminate the project. However, James secretly and illegally continued the project with the funding of the project coming from Alden's company, Greene PharmaCorp. When interrogated on the matter, James admitted that he was indeed developing a super serum, but it did not prove that he killed Rachel.

Towards the end of this case, James was found guilty of accompanying Alden in the murder of Rachel. When Alden was arrested, he explained to the team that Rachel had come to the secret lab, unaware that he and General Marsh were waiting for her. Alden revealed his plans for the serum, and why he could not allow her to interfere. General Marsh told Alden to kill Rachel, thus Alden took a syringe and injected her with the super serum. Since the serum was only made for men, the resulting bone growth ripped apart Rachel's skin and soon killed her, which explained how Rachel's body was found melting in a vat of acid, her skull smashed and separated from her body.

As a result of Alden's words in his arrest, James was arrested and both men were taken to court, where Judge Olivia Hall sentenced both of them to life imprisonment. 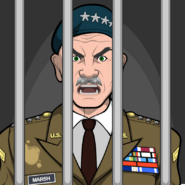 James, sentenced to life in jail for serving as an accomplice to Rachel Priest's murder. 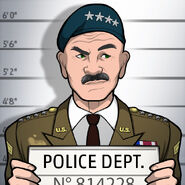 Retrieved from "https://criminalcasegame.fandom.com/wiki/James_Marsh?oldid=509913"
Community content is available under CC-BY-SA unless otherwise noted.