President James "Dubya" Hewett was a suspect in the murder investigation of agent Jonathan Stafford in Politically Incorrect (Case #53 of World Edition) before making a minor appearance in Operation Spyfall (Case #54 of World Edition) and playing a central role in The Darkest Hour (Case #56 of World Edition).

James is the 63-year-old President of the United States. He has neat graying brown hair and an eagle tie clasp. He dons a mocha leather jacket with the Presidential seal and a lapel pin on it over a light blue-collared shirt. It is known that James goes to rodeos and eats kuchen.

The team first arrive at Camp Rushmore to inform the President about SOMBRA's plans for international domination. He later became a suspect in Jonathan's murder after the player and Jack found the cuff links he gave to the victim. He was saddened at Jonathan's death, saying he was good friend who was good with taking care of him and his wife. When told about SOMBRA, he stopped them saying he already heard about it and that it was just nonsense.

James was spoken to again about his cowboy boots covered with mud from the lake, where the victim was found murdered. He said the lake was his private rehearsal spot for the Camp Rushmore hoedown, preferring to practice his moves by the lake in private. When asked why this would be happening with the murder and SOMBRA going on, James expressed that he did want to find Jonathan's killer, but he needed to focus on his presidential duties to calm the diplomatic situation at hand.

James was found to be innocent after the team incarcerated Sidney Hirsch for Jonathan's murder. But Jack and the player went to speak with him again to convince him about SOMBRA. But he still brushed it off like it was just another conspiracy theory. He suggested they search the conference room for the file left for him by the Russian president, who was keen on SOMBRA. They decided to follow up on the President's lead and search for the file.

In the middle of the investigation, President Hewett declared that the United States would cut its ties from the Unified Nations after Agent Forrest Hunt of the CIA was labeled as a suspect, making him believe that the Bureau and the international community was infringing on its sovereignty. This signified that SOMBRA had won in that aspect.

According to Elliot, the President was kidnapped while he was on Air Force One in New York. The team then concluded that SOMBRA had kidnapped the President, despite them believing that SOMBRA was over after their leader was arrested. The Bureau then set off to investigate his kidnapping and retrieve him.

During the investigation, Natasha Romanova's body was dumped by an unmarked van in Times Square, along with a letter opener from the President's office. With this, the team concluded that Natasha was part of the kidnapping slowly put the pieces of his kidnapping together during the course of the investigation. Natasha posed as a Russian diplomat and talked to Leila Malak of the Unified Nations to arrange a meeting with the President. On Air Force One, Natasha kidnapped the President and took him to the New York cloisters using a van. There, Vice President Sarah Bennett and Baxter Fraser (who was there because Sarah had manipulated him using his SOMBRA brainwashing) were waiting. Sarah then slashed Natasha's throat with the letter opener and took the President to the catacombs before releasing Baxter and dumping Natasha's body.

After the Vice President was incriminated, she escaped arrest with the help of her FBI agents. Baxter then told the team that she was heading off to the catacombs. There, Dupont, Jack, and the player found the President being held at gunpoint by Sarah. During the arrest, Sarah shot at Jack, injuring him in the head, and shot at Dupont in the chest, giving him a fatal wound. After Jack shot Sarah in the head, the President was rescued.

After his rescue, James had a long chat with Ingrid about SOMBRA. James finally believed the Bureau about SOMBRA, and started chatting with the Russian president about peace. Later, James attended the Unified Nations general assembly, stating that the decisions to build a wall on the US-Mexico border and to leave the Unified Nations were all done on Sarah's discretion, but not without taking some responsibility for the actions as well. He then said that he would tear down the wall and reinstate the US in the UN. 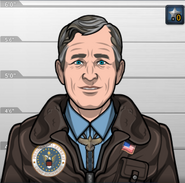 James, as he appeared in Politically Incorrect (Case #53 of World Edition). 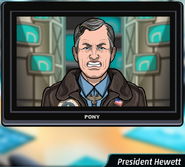 James, as he appeared in Operation Spyfall (Case #54 of World Edition). 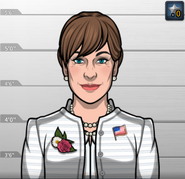 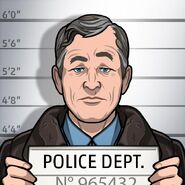 Retrieved from "https://criminalcasegame.fandom.com/wiki/James_Hewett?oldid=494178"
Community content is available under CC-BY-SA unless otherwise noted.