Jakobo was a 55-year-old South African pilot who had flown The Bureau's plane to Kenya. He had curly gray hair underneath a black pilot's cap and dark brown eyes. He wore a white pilot uniform and a black tie at the time of his death.

Jakobo alerted the Bureau of an explosion in one of the plane's engines and made a crash landing in a baobab tree in Madagascar. He, along with co-pilot Jasmine Hart, climbed down from the plane and the tree in order to alert the US Embassy of the incident.

Jakobo was then found by the plane wreckage hours later with his throat slashed. Despite the circumstances, Angela could tell instantly that the cut in his throat was the cause of death, which made him bleed out in seconds. The cut itself was deep and broad, and had signs of tear marks meaning the blade was serrated, so she told Carmen and the player to keep their eyes out for a hunting knife. She also found nasal mucus on the victim's face which had grass pollen, which meant it was hay fever. Since the victim had no symptoms of such a reaction, this meant the killer had hay fever.

After investigating the docks for a second time, the team managed to find a hunting knife. Despite the lack of the victim's blood, Angela confirmed it was the murder weapon due to the serrated blade matching the victim's wounds. She also managed to find blue fibers on the knife's handle, and determined they came from an article of clothing. This meant the killer wore blue clothes.

Jakobo was threatening to report Jasmine to the tribunal after seeing her take ecstasy in a nightclub when she was already on probation for drug use. Jakobo was blackmailing Ambassador Alex Lange (who often hired him for private business trips) into giving him names of high-profile contacts with a picture of him with some prostitutes on an "unofficial flight" Jakobo flew for him. Jakobo also blamed mechanic Ninah Zafy for some safety problems with his plane, but Ninah said it was the fault of his poor maintenance. Jakobo had been military pilots with Aristide Akintola before Jakobo got him kicked out of the military. While Jakobo was running around to get help after the crash, he ran through Patrick Bota's raffia field, prompting Patrick to fire a warning shot through his hat.

The killer turned out to be Aristide.

Aristide denied involvement but later admitted to the crime. He only said that he wanted to kill all people inside the plane, but when he spotted Jakobo in Antananarivo, he could not resist chasing him and slicing his throat with a hunting knife as revenge for getting kicked out of the military. Despite his silence, the team deduced at court that someone had paid Aristide to carry out the hit. Judge Adaku sentenced him to 30 years in jail.

The team would later discover that SOMBRA had paid Aristide, giving him flight plans supplied to them by the mole within the Bureau. 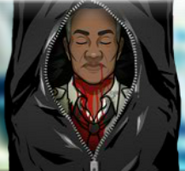 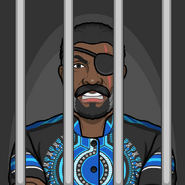 Retrieved from "https://criminalcasegame.fandom.com/wiki/Jakobo_Nkosi?oldid=491912"
Community content is available under CC-BY-SA unless otherwise noted.