Jake was the 46-year-old ex-husband of Gloria Hayes and father of Carter Hayes. He had short black hair, a beard, and a mustache. He wore a white shirt under a buttoned red plaid shirt.

In his minor appearance in Breaking News and at the time of his death, he replaced his red plaid shirt with a green plaid shirt.

Prior to the events of The Conspiracy, Jake and Gloria had a divorce, resulting in him gaining custody of Carter.

Gloria explained to the player that she had divorced from Jake and that he took custody of Carter. Because Jake originally lived in Grimsborough, he moved back there with Carter. Wanting to spend more time with their son, Gloria eventually moved to Grimsborough and applied for a position in the Grimsborough Police Department.

After arresting Gregory Lynn's killer, Jake arrived at the station and asked for Gloria and the player's help. He explained that he had given Carter a Mr Bunny costume to wear for Halloween, but Carter had gotten upset over it, leading Jake to think that he had ruined Halloween for him. Gloria and the player later found a Captain Sombrero outfit for Carter, who was much more pleased when he received it.

Mid-investigation, Jake arrived at the precinct after he chased after Carter, who had taken a pig from the scene of the murder. After reprimanding his son, he agreed that he would not tell Gloria about the incident if they returned the pig. Carter agreed, and the two left the precinct.

After arresting Louis Leroux's killer, Gloria, Rita and the player confronted the four remaining members of Ad Astra. However, Ad Astra forced the team to retreat by keeping Jake and Carter hostage with Julia Brine's poison gas. Ad Astra then fled with Jake and Carter in tow.

Jake's body was found shot in a tube room at the housing construction site. Martine determined that Jake had been shot twice with a .38 caliber handgun, the bullets hitting his brachial artery and pulmonary artery. She found traces of cough syrup on the zip ties around Jake's wrists, allowing Martine to conclude that the killer suffered from a cough.

After returning to the crime scene, Jones and the player found a handgun. Rita confirmed that the handgun was the murder weapon and revealed that she had found some skin cells on the weapon. Martine analyzed the skin cells and concluded that the killer had red hair.

Jake was Danny Williams' nephew. Jake offered Danny a job at his engineering company after he returned from the war, but Danny's alcoholism negatively affecting his job led to Jake deciding he would get fired from the company, much to Danny's anger.

The killer turned out to be Mayor Joe Warren's assistant, Mandy Pregodich.

Upon admitting to the murder, Mandy said that Mayor Warren had asked her to keep watch over Jake and Carter, telling her that Jake was a political enemy. Wanting to remain close to the city's most powerful man, she agreed. However, Jake had woken up and tried to escape, leading to a fight that culminated in Mandy shooting him dead and taking Carter away. Judge Powell sentenced her to life in prison. 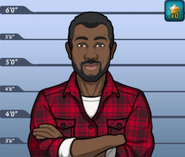 Jake, as he appeared in Trick or Treat (Case #41 of The Conspiracy). 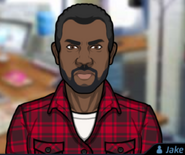 Jake, as he appeared in Like a Pig to the Slaughter (Case #46 of The Conspiracy). 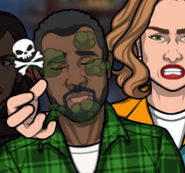 Jake, as he appeared in Breaking News (Case #54 of The Conspiracy). 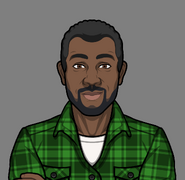 Jake, as he appeared in Running Scared (Case #55 of The Conspiracy). 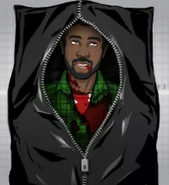 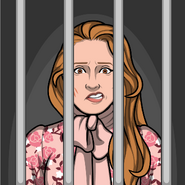 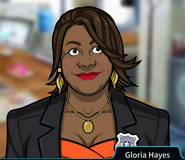 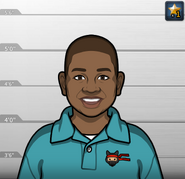 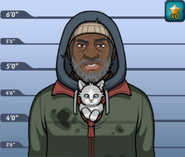 Danny Williams, Jake's uncle.
Add a photo to this gallery

Retrieved from "https://criminalcasegame.fandom.com/wiki/Jake_Hayes?oldid=491867"
Community content is available under CC-BY-SA unless otherwise noted.