Jake Drill was the killer of scientist Bruce Green in The Seeds of Death (Case #41 of Pacific Bay).

Jake is a 34-year-old now-former oil well worker residing in Rhine Canyon. He has brown hair, blue eyes and scratches on his neck. He wears an orange construction vest and a hard hat with safety goggles on it. He has an oil stain on his uniform and wears a pair of gloves. It is known that Jake has asthma and eats sunflower seeds.

Jake was flagged as a suspect when Amy and the player identified him on a badge left broken on the murder scene. When shown a picture of the murder victim, he identified the man as Bruce Green and described him as a scientist who often came to the oil well to take a look around and ask questions about earth pollution. Jake also explained that Bruce would take some earth samples and take them back to his laboratory. When asked if he knew about anyone carrying a grudge against the victim, the oil well worker told the team that the victim never made trouble for himself.

Jake was approached again when Amy and the player found a farming magazine with a note to his son, given to him by the victim. Jake explained that he and the victim were not close, but they talked for a little, and Jake told Bruce about his family. Bruce had dropped the magazine on Jake's doorstep, thinking he would change everybody's life by growing corn in the desert. However, Jake claimed that he and his family have been drillers for three generations, and he expected his son to take over when he got older, but Jake admitted that most people in the oil well got asthmatic from breathing in the oil. The oil worker suddenly had a change of heart, saying that his son would have a better life with farming and admitted that he and his family loved sunflower seeds.

Jake was revealed to be the killer of Bruce Green. Jake stated the team made a mistake arresting him but finally admitted the crime when the evidence collected by the team pointed towards him. Bruce managed to make corn grow in the arid grounds of Rhine Canyon (meaning a huge step in the fight against hunger) and was about to auction his project to the big companies, which Jake disliked a lot. If the big companies bought Bruce's project and implemented it in the district, agriculture would get over oil drilling activities and the oil well would close down, leaving Jake and his fellow workers unemployed. Jake only knew only about oil drilling and needed to put food on his family's plate, not to mention he wanted his son to continue his legacy as an oil well worker, so he did not like what Bruce was doing, prompting him to knock the scientist out with a wrench before chaining him to a pipe, cutting his stomach open and leaving him for the vultures he attracted with some sunflower seeds. Jake was then shipped to the court.

In court Judge Dante asked Jake if he could fill his tank given he is an oil well worker but jokes aside, he stated that a man who was about to help the world was murdered and vultures are used to dead meat, whilst live meat could have indigested them. For the murder of Bruce Green and animal abuse, Jake was given a 25-year jail sentence before adjourning. 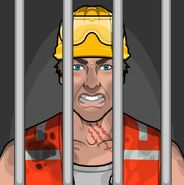 Jake, sentenced to 25 years in jail for the murder of Bruce Green and the abuse of animals. 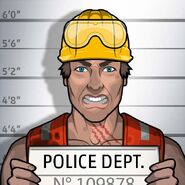 Retrieved from "https://criminalcasegame.fandom.com/wiki/Jake_Drill?oldid=437483"
Community content is available under CC-BY-SA unless otherwise noted.