Jacqueline was a 45-year-old book author. She had blue eyes, short brown hair, and glasses.

In her first appearance, she wore a red shirt and a leopard-patterned scarf with a fleur-de-lys brooch on it. She also wore a black office skirt and a black pantyhose. Additionally, she was seen holding a cigarette on her left hand and her book, The Nightingale, on her right hand. She also sported a ring on her left hand. It is known that Jacqueline ate camembert, smoked and read French philosophy.

In her second appearance, she wore a red and white polka-dot bikini and had sunglasses atop her head. It is discovered that she knew Greek mythology, ate olives and knew how to sail.

In her quasi-suspect appearance, she was seen holding a phone on her right hand.

Jacqueline was first spoken to after Carmen and the player found an autographed cardboard cut-out of her she sent to the victim. She sent the cut-out to Annette as a gift, saying she was a creative inspiration to women everywhere. Jacqueline was shocked to hear that Annette was murdered, but wondered at the same time if the Manuscript she recently obtained was part of it.

Jacqueline was interrogated again after she called the player and Carmen to the Louvre. She had been looking for Annette's Manuscript as well, and considering it was nowhere to be found she was interrogated again on the spot. According to her, she heard that Annette bought the Manuscript and asked her if she could use it for researching her next book. However, Annette would not let her have any access to the book. Carmen pointed out how Jacqueline called Annette an inspiration before, and while she did say that she felt the victim was holding back her creative talents by not granting her access to the Manuscript.

Jacqueline was found to be innocent after the team incarcerated Constantin Perrier, however they needed her help in decrypting the Manuscript. From what she could tell, something was going to happen in Germany. She was not sure as what would happen or where in Germany it would be, but given more time with the book she could find out. Given how valuable as evidence the Manuscript is, Carmen would not allow her to keep it. They at least allowed her to make a copy of it, and she swore she would share her findings with them.

Jacqueline found herself in trouble after Jack and the player found a manuscript titled "The Murder of the Minister" and Dupont determined it was written by her. She was grateful to the player for finding the manuscript, saying she got inspiration for it when she visited a nearby cave. Jack was curious how Jacqueline wrote the manuscript so fast before the victim's death, to which she replied saying she worked on it day and night for two whole weeks, then left in order to get on with the editing.

Jacqueline was interrogated again after the player and Jack found her plane ticket headed towards Barcelona, Spain. They managed arrived at the airport before Jacqueline left, and she explained she was headed to Spain for fresh inspiration. Jack made sure to inform her as a suspect in a murder investigation, she was not allowed to leave. However, Jacqueline stated that if she were really the killer, she would have escaped already thanks to her creative thinking while writing books. But Jack made it clear she was not allowed to leave until the murder investigation came to a close.

Despite her sudden last-minute flight, Jacqueline was found innocent of murder a second time after the team incarcerated Nikolaos Costas. However, Carmen and the player needed to speak with her regarding her fingerprints on a Promethian map. Jacqueline explained she was researching the Promethians for her next book, making the connection between the murders in London and Paris when she first found it. However, she did not tell the police about this because she thought they would not believe her. According to her information, the Promethians next move would be in Rome, Italy. Then said she would have no involvement in any events there due to her departing to Spain.

Jacqueline called Carmen and the player saying she had “become a member” of the Promethians just when Chief Ripley and Carmen agreed that Brother Klaus was also the one responsible for blackmailing Johan Schnee and Enid Grimshaw to commit their respective murders. Jacqueline felt that something would happen in Spain, so she told Carmen to talk to Klaus in prison about the cult’s plan. Unfortunately, the team could not get anything out of Klaus as he burned himself to death during the talk, saying that the plan had ended where it started.

The team called Jacqueline back which she replied that she knew what Klaus did and shockingly explained to the team that there was a detonator somewhere in Spain, with the Promethian leader, hence why the cult went to regroup there. Jacqueline told Carmen she knew where it was hidden when they came to Spain, not on the phone because they were already on to her. Jacqueline ended the call by saying she would wire money for the player's journey and she had to go because someone was coming. Chief Ripley ordered the player to travel to Spain in order to find Jacqueline and the detonator before it was too late.

Jacqueline was found roasted inside a brazen bull next to the Consuegra windmills in Spain. Angela deduced Jacqueline burnt to death when the metal bull she was in heated with the fire below it, flagging the bronze bull as the murder weapon. Angela also found the Ancient Aramaic word for "traitor" branded on her skin. This proved the killer knew Aramaic.

The killer turned out to be the CEO of the European Central Bank named Archibald Gilchrist.

Disguised as Promethians, Jack and the player were able to get a direct confession from Archibald of being the leader of the Promethians. The banker then laid out the details of the murder. He had Papadakis lure Jacqueline to Park Güell in Barcelona. He then ambushed her, dragged her out to the countryside, branded her, and set the bronze bull ablaze in order to send a warning to those standing in the Promethians' way. Jack and the player took off the disguises and sent Archibald to trial. Archibald did not reveal to Judge Adaku where to find the detonator so he sentenced the former to life in prison. 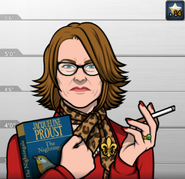 Jacqueline, as she appeared in Off with Their Heads (Case #2 of World Edition). 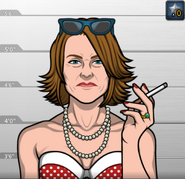 Jacqueline, as she appeared in Murder's Cheap (Case #4 of World Edition). 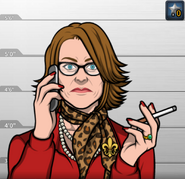 Jacqueline, as she appeared in When Shadows Fall (Case #5 of World Edition). 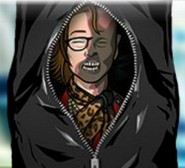 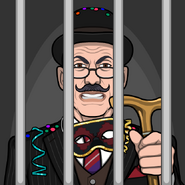 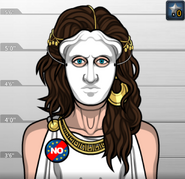 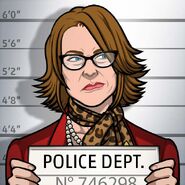 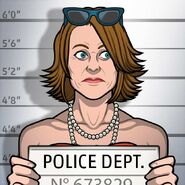 Retrieved from "https://criminalcasegame.fandom.com/wiki/Jacqueline_Proust?oldid=533907"
Community content is available under CC-BY-SA unless otherwise noted.