Jacob Gilbert was a suspect in the murder investigation of SOMBRA assassin Kayla Pieterse in Kicking the Bucket (Case #39 of World Edition).

Jacob is a 26-year-old rich kid. He has short cinnamon brown hair and brown-tinted sunglasses, and a cut across his lower lip. He dons a blue suit with a red handkerchief in his pocket over a white shirt. It is known that Jacob eats melktert, speak Afrikaans and goes yachting.

Jacob became a suspect after the player and Jack found his yacht trophy in the yacht club the victim was a part of. When informed of the murder, he was not sure if her knew the victim as he said he is always surrounded by people. Though he said his therapist said to him he does it to compensate the loss of his parents, he felt that it was malarkey and left.

Jacob was spoken to again about his DNA found on cocaine in a locket. According to Lars, and with a little help from Elliot, he said Jacob went to rehab in Indonesia. Unfortunately, there was no rehab center there when he checked. Jack suspected that Jacob was a part of SOMBRA, since their camp was located in Indonesia. However, Jacob was not even aware of SOMBRA's existence. When Jack pointed out there was no rehab center in Indonesia, Jacob said it was not registered as he felt the paparazzi would be all over it.

Jacob was later proven to be innocent after Kwanele Mthembu was incarcerated for Kayla's murder. 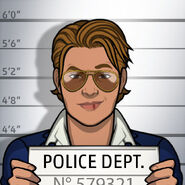 Retrieved from "https://criminalcasegame.fandom.com/wiki/Jacob_Gilbert?oldid=482578"
Community content is available under CC-BY-SA unless otherwise noted.