Jacob Fishman (Heb: יעקב פֿישמאַן) was a suspect in the murder investigation of ex-convict David Breitman in Payback (Case #12 of Pacific Bay).

Jacob is a 68-year-old rabbi who operates the synagogue at Inner City. He has white hair and a bushy beard and mustache. He wears glasses and a kippah on his head. He sports a white and black striped kittel. Underneath his robes, he wears a black tuxedo with white shirt below. To top it all, he wears a pink tie with a Star of David symbol etched on it. It is known that Jacob drinks tea.

Jacob found himself in the red the moment Hannah found out that David lived in his synagogue per an encrypted file, stored in the Pacific Bay Prison archives. Amy informed the rabbi that David, who lived in the synagogue since his release, was murdered. Jacob replied that although it was true David was a convict, he tried to turn his life around, so the rabbi was generous enough to permit David to live in the synagogue until he found a place to call home. Jacob viewed David as a nice man in spite of his illicit activities as a thief and suggested that the team should investigate the train station since David had a lot in his mind prior to him getting murdered in the morning.

Jacob was due for a second conversation with Pacific Bay authorities after the player pieced an old photo of Jacob and Eva Breitman (from 25 years ago) in their second visit in the synagogue, in which the photo pleaded with Jacob to take good care of Eva. Jacob told the team since David got arrested, he felt Eva needed a father figure, therefore Jacob came to play. Although Eva had a difficult life due to her father's incarceration, Jacob managed to give guidance to Eva to ensure she lived a righteous life, but Jacob was annoyed when David asked for more help upon release from prison--in which he viewed David as a beggar and Eva as a foster daughter from his point-of-view.

Jacob was caught in the middle of an act of anti-religious vandalism by Inner Chaos hours after the killer was incarcerated and impounded for grand homicide. 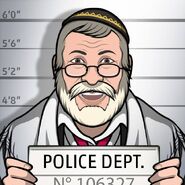 Retrieved from "https://criminalcasegame.fandom.com/wiki/Jacob_Fishman?oldid=413793"
Community content is available under CC-BY-SA unless otherwise noted.