Jackson Peacock was a suspect in the murder investigation of former Grimsborough PD coroner Nathan Pandit in Snake in the Grass (Case #1 of The Conspiracy).

Jackson is a 51-year-old zoo owner. He has short brown hair, brown eyes and a mustache. He wears a red jacket with a peacock pin over a gray turtleneck. He is seen holding a cigar. It is known that Jackson can handle snakes, reads The Jungle Book and wears Eau de Wild.

Jackson was flagged as a suspect when Jones and the player found his aggressive message to the victim. When asked about it, he said he was simply reminding Nathan not to be late, before complaining about how hard it was to find a suitable veterinarian. He then left, complaining about the zoo's terrarium. This prompted Jones and the player to search the terrarium for more clues.

Jackson was spoken to again about a video of him and Nathan arguing about Jackson supposedly trafficking baby pandas. When asked about it, he denied the accusations but said that if he had been trafficking pandas, it shouldn't have been a big deal. However, he revealed that Nathan had threatened to report him to the authorities.

Jackson was found to be innocent when the team arrested Kit Partridge for Nathan's murder. However, with help from zookeeper Vince Moon and zoo consultant Harper Stone, Jones and the player arrested him after finding a list of baby panda sales signed by Jackson through Nathan's diary. 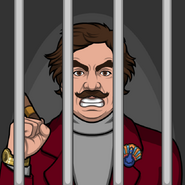 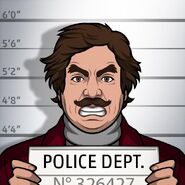 Retrieved from "https://criminalcasegame.fandom.com/wiki/Jackson_Peacock?oldid=496120"
Community content is available under CC-BY-SA unless otherwise noted.