Jack Ryan was a suspect in the murder investigation of stock trader Samuel Rye in Blood on the Trading Floor (Case #12 of Grimsborough).

Jack is a 30-year-old stock trader with brown hair curled to the side in a posh fashion. Jack wears a gray and white waistcoat on top of a matching tie. It is known that Jack uses face cream and is a Sagittarius.

After speaking with Brooke Chase about the death of Samuel in the trading floor, Jones and the player spoke to Jack. They asked him if he knew the victim and what his relationship with him was. Jack told the team that he did not even know whether he was with Samuel at the casino since he had mixed his barbiturates with his drink and from then on, the whole night was one big crazy blur for him. Later, the team found out that Samuel had sent Jack a phone text in which the victim threatened him. Many people said that they had seen Jack with Samuel the night he was murdered, but that was because Harry had told them that he was Jack Ryan. 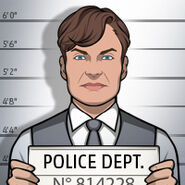 Retrieved from "https://criminalcasegame.fandom.com/wiki/Jack_Ryan?oldid=481618"
Community content is available under CC-BY-SA unless otherwise noted.