Jack Goodwin was the victim in Sweet Revenge (Case #9 of Mysteries of the Past).

Jack was a dock worker disguising himself as a wealthy socialite. He had short blond hair, green eyes, and donned a maroon suit with a grey dress shirt and striped maroon tie at the time of his death.

Jack's body was found floating in a chocolate river, with his mouth stuffed with chocolates. Per Dick, the victim died after being force-fed chocolate, as his esophagus was full of it, while he was intoxicated with cough syrup and champagne. Dick also found sugary ligature marks in Jack's wrists, which meant the killer tied him. Per the coroner, the killer also leaned on Jack with their own body pressure to subdue him, leaving marks that led Dick to deduce that the killer was left-handed.

In the factory's production line, Isaac and the player found a strange machine known as the Chocolometer 1000. Its mechanical claw contained (per Viola) the victim's blood, which meant that the machine was the murder weapon. Viola also found traces of mint julep on the claw, meaning the killer drank mint julep.

Jack was the boyfriend of Verushka Coldwell. The two were friends with socialite Violetta Blue, who had taken Jack under her wing. However, she grew tired of his reckless attitude ruining her reputation.

Jack attended Mr Alastor's third party at Rockley Rochester's chocolate factory. Prior to the party, Jack had stolen the recipe to Rockley's everlasting snozzgopper and blackmailed the chocolatier, threatening to distribute the recipe unless he was handsomely paid. Jack was also friends with Rockley's first-cousin-once-removed, Archie Rochester. At the party, Archie spiked Jack's drink, hoping that Jack would make a fool out of himself as the two had fallen out.

The killer turned out to be Violetta.

After denying involvement, Violetta admitted to the crime. Violetta could not stand when Jack started dating Verushka Coldwell, whom she loved. Feeling betrayed, Violetta tied Jack with licorice candies and used Rockley's Chocolometer 1000 to stuff him to death with chocolates. Judge Takakura sentenced her to 15 years in jail without parole. 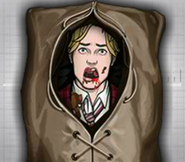 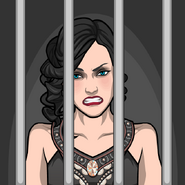 Verushka Coldwell, Jack's girlfriend.
Add a photo to this gallery

Retrieved from "https://criminalcasegame.fandom.com/wiki/Jack_Goodwin?oldid=452396"
Community content is available under CC-BY-SA unless otherwise noted.