Jack Cannity was a suspect in the murder investigation of old man Sam Chey in No Mercy for Old Men (Case #20 of The Conspiracy).

Jack is an 83-year-old resident at the Shady Hollow rest home. He has short gray hair and a mustache. He wears a white open-buttoned shirt that exposes his chest hair under a beige suit jacket with a matching hat. Additionally, he carries a walking cane in his left hand. It is known that Jack drinks hot toddies and plays bingo.

Jack became a suspect after Gloria and the player (per Amir) learned that he had used the victim's denture. He explained that he had played a joke on the victim, who was his friend. He then said that Sam's death reminded him that he had to be mindful not to let himself slip.

Jack was spoken to again about his grudge against the victim after he made a fuss at Basil Cavendish's tailor shop. He explained that he knew that the victim was cheating at bingo, which irritated him. Gloria then told him to go home.

Jack was found to be innocent after the team incarcerated Basil Cavendish for Sam's murder. 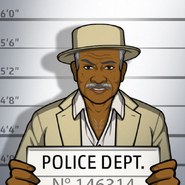 Retrieved from "https://criminalcasegame.fandom.com/wiki/Jack_Cannity?oldid=408467"
Community content is available under CC-BY-SA unless otherwise noted.