Izzy is a 32-year-old conspiracy theorist. She has brown eyes and pink dreads which she ties in two separate buns. She has a mole under her right eye and sports a nose ring. She is seen wearing a navy blue strapless shirt with the text "TRUST NO ONE". Additionally, she has a tattoo of an insect on her left shoulder.

In her first suspect appearance, it is known that Izzy is claustrophobic.

In her second suspect appearance, it is discovered that she is right-handed, plays the electric guitar and uses dry shampoo.

In her fourth suspect appearance, it is revealed that she works out, drinks cold brew coffee and uses antiperspirant.

In her fifth appearance, it is learned that she uses eye drops and knows how to tie knots.

The Saddest of All Keys

Izzy was flagged as a suspect when Jones and the player found her causing a ruckus outside the concert proclaiming that Ian was not really dead. When confronted, she was glad to know that the police were involved in his death. She said that she believed that the real Ian had actually died in a shipwreck in 1969 and that the victim was an impostor. Izzy then claimed that Ian was killed because she was getting too close to the truth.

Izzy was due for another interrogation when the team found her DNA on a toothbrush that belonged to the victim. According to Rupert, Izzy happened to be Ian's biological daughter, as their DNA matched. Before Jones could tell her about Ian being her father, she claimed that she was trying to use Ian's toothbrush to prove that he was an impostor. After Jones repeatedly stated that Ian was her true father, Izzy was extremely shocked.

Izzy was found to be innocent after the team incarcerated Kevin St Kevin for Ian's murder. But she was later confronted by Gloria and the player over her latest conspiracy theory. She told them that people were dying of the same thing all over town, and that she had all of her information on her USB key, which she had lost at the concert venue. Gloria and the player then reinvestigated the venue. After finding the USB key, Martine was able to confirm that there was a serial killer in Fairview.

After arresting the Rocket Cow Killer, Gloria and the player interrogated Izzy about the package she had sent to Cathy, which contained radioactive mushrooms. After berating Cathy for being another "sheeple", she told them that she had taken the mushrooms from the satellite wreckage, and she would have taken something more substantial if she hadn't been spotted before she got to the dome. When Gloria asked her about the dome, Izzy told them that the purpose of the dome was unknown and warned them about the fact that conspiracies were everywhere.

Izzy became a suspect again after Gloria and the player found her graffiti at the scene of the crime. Before Gloria could explain why they were questioning her, Izzy ranted about the government's involvement in the evils of electricity. Thinking that they were there to accuse her of causing the blackout, Izzy denied any involvement and denied knowing who the victim was.

Izzy was spoken to again about her breaking into the control tower. She revealed that she needed to see the victim to tell him about a conspiracy where there was a plan to kill everyone with electricity. However, he kicked her out and threatened to call the police on her.

Izzy was found to be innocent again after the team incarcerated Felix Murray for Ryan's murder.

Izzy became a suspect for the third time after Gloria and the player found her collage of the victim. She revealed that she had been watching Savannah's every move because she was the only authentic person in "fake plastic celebrity land". She then claimed that Savannah had been killed because of that.

Izzy was spoken to again about her snooping around the victim's finances. She told the team that she had discovered that Savannah had been stealing money from her charity for the earthquake victims. Gloria then questioned Izzy's validity, prompting Izzy to give the team her proof of Savannah's embezzlement.

Izzy was found to be innocent for the third time after the team incarcerated Clarisse Gold for Savannah's murder. After the trial, Judge Powell reviewed Izzy's proof over Savannah's embezzlement and confirmed that Izzy's claims were true.

Izzy became a suspect once again after Gloria and the player found her fingerprints on a newspaper clipping next to the victim's body. She explained that Henry was her old high school science teacher and that, after finding an old article that said he was living in Newmark, she decided to try and reconnect with him. She was then informed that Henry had been killed, leading her to inform the team that he had always been very ambitious.

Izzy was spoken to again about her threat to the victim and the fact that she had violently attacked him whilst she was in school. When confronted, she told the team that her school records were all lies and that, in actuality, she had been the one who had been attacked by Henry. In high school, Henry's lack of patience with her incessant questions resulted in him giving her detention in which he held her hand over a Bunsen burner as punishment. When she tried to expose the truth, he told everyone that Izzy had attacked him. Her real reason behind trying to track him down was to confront him for the abuse that she endured in high school.

Izzy was found to be innocent once again after the team incarcerated April Liu for Henry's murder.

Izzy became a suspect for the fifth time after Jones and the player found her glorified drawing of the neohumans. She told the team that the old order was corrupt and that the neohumans were their saviors. When she saw the dome up in flames, she ran to investigate and saw the neohumans marching out. However, she denied seeing Denise with them.

Izzy was found to be innocent for the fifth time after the team incarcerated Otto Kessel for Denise's murder and for assuming the role as leader of the neohumans. 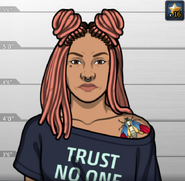 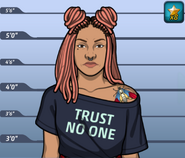 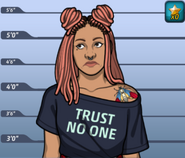 Izzy, as she appeared in Extinguished (Case #58 of The Conspiracy). 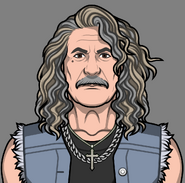 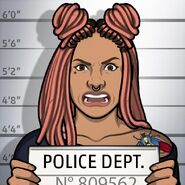 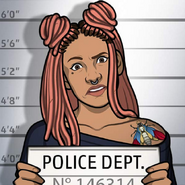 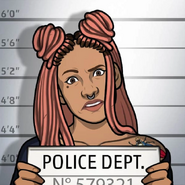 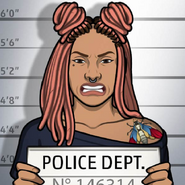 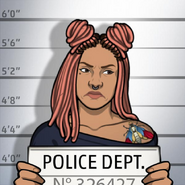 Retrieved from "https://criminalcasegame.fandom.com/wiki/Izzy_Ramsey?oldid=475088"
Community content is available under CC-BY-SA unless otherwise noted.