Izzah Farid (Arab: عزة فريد) was a suspect in the murder investigation of oil magnate Donald Barnes in Death in the Desert (Case #8 of World Edition).

Izzah is a 27-year-old widow whose husband died in an accident at the victim's oil refinery. She has black hair and dons a blue hooded robe and a bone necklace. She also has two large earrings. It is known that Izzah rides camels, eats dates and drinks goat's milk.

Izzah was first interrogated after the player and Carmen identified her from a newspaper highlighting an accident that took place at the victim's oil refinery. She said her husband died in an explosion with 16 other people, all of which she knew. Izzah went on to say that the SandOil management only wanted money, and they treated local workers like they were slaves. When Carmen asked if she personally met the victim, Izzah said the company only sent him only so he could hire more local workers.

Izzah was interrogated again about a message telling locals to fight against foreigners, which her DNA was found on. Since her husband was dead, she takes time to look after the workers who she considers to be her family. She made that message to protect their land from those who are exploiting it. When Carmen suggested she would go as far as to kill Donald Barnes, Izzah said she did not but was grateful to the person who did.

Izzah's innocence of the murder was proven after the team incarcerated Mama Yasmine, but she was caught in the red after the team found a message she wrote saying to defend their land. What is more, is that the message bore a sword, which is the code name the assassin responsible for Chief Ripley's murder is going by. When asked about The Sword, Izzah said some say it was a great leader, while others say it was a god. What she felt was important was that people were uniting under The Sword in order to rebuild the land. 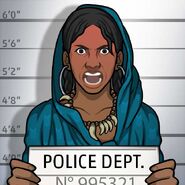 Retrieved from "https://criminalcasegame.fandom.com/wiki/Izzah_Farid?oldid=489984"
Community content is available under CC-BY-SA unless otherwise noted.