Ivan Imlay was a suspect in the murder investigation of activist Claire Godwin in The Wollcrafts' Creature (Case #30 of Grimsborough).

Ivan is a 45-year-old gravedigger with curly brown hair covered underneath a mud-stained black hat. He wears a black mud-stained coat underneath a white shirt and black tie and is seen holding a shovel. It is known that Ivan has burned skin and a knowledge in engineering.

Ivan is the gatekeeper of the Ellington Pet Cemetery. He was interrogated after Jones and the player finished investigating the dog parcel. When asked if he had seen anything strange lately around the cemetery, Ivan replied that he had not. He said that he mostly used to see grieving families looking for a quiet place to put their deceased animals to rest in peace. He then assured the team that he had nothing unusual, and suggested them to talk to Fran Wollcraft since she came everyday to the cemetery to pay her respects to her deceased dog, Elphaba (2005-2013).

Ivan was later again interrogated after the team found out that Fran had dug up her dead dog in the cemetery to reanimate her using stolen bones from other animals. When asked why he did not stop Fran from doing this, Ivan answered that he wanted to protect her by not saying anything and that she was a special kind of woman. He told the team that he and Fran used to talk about engineering theories together, and then, Fran suddenly became obsessed with reanimation, but Ivan did not think much of it. Then, after he found Elphaba's dead body which was all stitched up, he realized what the Wollcrafts were really trying to do, and as a result, he had immediately brought Elphaba's corpse to the team before. Ivan then gave the team a camera which he had found under the dog's corpse. They then proceeded to examine the camera, which gave them the fifth and final clue about the killer. 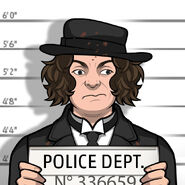 Retrieved from "https://criminalcasegame.fandom.com/wiki/Ivan_Imlay?oldid=465358"
Community content is available under CC-BY-SA unless otherwise noted.