Itzik (Heb: איציק גלבר) and Esther Gelber (Heb: אסתר גלבר), appearing as unseen minor characters in Criminal Case, were mentioned during the events of Slash and Burn (Case #2 of Mysteries of the Past).

Little is known about Itzik and Esther, except that they were related to Rivke Gelber and that Esther was a baby girl who owned a doll.

During the investigation, Rivke attacked Mary Patrick, accusing her cousin, Harriet Patrick (who happened to be the case victim), of being a murderer. When interrogated, Rivke lamented over Itzik and Esther and revealed that they had died in the city fire. She said that all she had left of them was the doll she was holding. 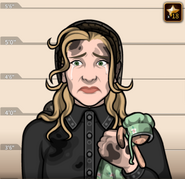 Rivke Gelber, Itzik's wife and Esther's mother.
Add a photo to this gallery

Retrieved from "https://criminalcasegame.fandom.com/wiki/Itzik_and_Esther_Gelber?oldid=471217"
Community content is available under CC-BY-SA unless otherwise noted.