Isabel Vázquez was the killer of her fiancé, torturer Mateo Arias, in Hell to Pay (Case #12 of Travel in Time).

Isabel is a 19-year-old maiden engaged to the victim. She has green eyes along with long blonde hair braided at the top. She wears a green patterned long-sleeved shirt with a dark diamond pattern running down the middle with two white puffs on each sleeve. She also sports silver earrings. It is known that Isabel knows anatomy, eats olives and plays Triumph.

Isabel became a suspect after Jack and the player found her fan at the Inquisition tribunal. Shocked upon being told about the murder, she revealed that Mateo was well-known amongst the public as he was Grand Inquisitor Cardinal Cisneros' right-hand man. However, she denied knowing the victim personally.

Isabel was spoken to again about her connection to Mateo after Jack and the player found a handkerchief embroidered with both hers and his initials. She confessed that she was engaged to Mateo as she needed to marry after the unexpected death of her father had left her with all of his debts. She told the team that Mateo had been trying to win her hand in marriage for months, so she relented and agreed to marry him.

In the end, it was proven that Isabel was Mateo's killer. Admitting to the murder, Isabel told the team that Mateo had murdered her father after she rejected his proposal. Highly indebted after her father's death, Isabel needed a husband and reluctantly got engaged to Mateo, without knowing he was her father's killer until she overheard Mateo gloating about his actions. Deciding to make him pay with his life, Isabel laced Mateo's drink with sleeping drops and then tied him to a torture table, where she slashed his body several times with a sickle before slashing his throat. Understanding her crimes, Cisneros decided to excommunicate Isabel and quietly banish her from Spain. 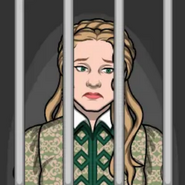 Isabel, excommunicated and quietly banished from Spain for the murder of Mateo Arias. 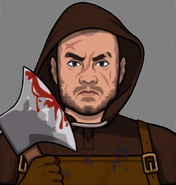 Retrieved from "https://criminalcasegame.fandom.com/wiki/Isabel_V%C3%A1zquez?oldid=497923"
Community content is available under CC-BY-SA unless otherwise noted.