Isaac Weston was the killer of scout master Connor Sullivan in No Smoke Without Fire (Case #29 of Grimsborough).

Isaac Weston is a 25-year-old Eagle Scout with crew-cut black hair and thin mustache. He wears a standard tanned green scout's folded hat and outfit with a purple Fleur de Lys, a sash containing many badges, a yellow neckerchief, a blue backpack, and a gray wristwatch on his right wrist. It is known that Isaac knows First Aid gestures, is left-handed and eats chocolate.

Isaac was the Eagle Scout who worked under his leader, Connor Sullivan, the chief of the Grimsborough Boy Scouts. He was interrogated since he was next in-charge after Connor's death. When asked who would have killed his scoutmaster, Isaac told Jones and the player that Connor was not a very kind man, but he could not imagine anyone wanting to murder the victim, especially in the camp. When asked about the bonfire, Isaac answered that every night, the scouts used to gather around the fire to sing and eat grilled marshmallows.

Afterwards, while discussing about the case in the station, Isaac suddenly appeared to tell them everything about Connor. He said that Connor always used to start fires in restricted areas and terrorized the young scouts he was supposed to supervise. Isaac then said that victim had also misused the cookie-money (the money that young scouts raised by selling their cookies, which was meant to fund expeditions and allow the scouts to buy new equipment), to buy liquor and get drunk on the job. And since the scouts were very afraid of their Scoutmaster, they pretended to know nothing. When asked why he did not report the incident, since it constituted as a felony, Isaac replied that Connor was his superior, and scouts were not allowed to question their superior's actions.

At the end of the case, the team had enough evidence to indict Isaac as the killer. When confronted, the young man defended himself by saying that sometimes people like Connor needed to be "put down." Isaac continued that one day, Connor got drunk and lit a fire in a restricted zone of the forest, despite warnings from a hunter named James Savage. Isaac then saw the fire and just when he was extinguishing it with a branch, Connor came and started arguing with him. Without even thinking, Isaac lashed out with the branch, and Connor responded by lunging for his scout's throat. To save himself, Isaac stabbed Connor with James' knife, which he had found a day before in the forest, then stabbed him five more times out of anger. And when he finally regained control, he realized what he'd done and tried to revive his Scoutmaster, but it was too late. Fearful of anyone seeing the body, he tried disposing of it in a bonfire. He then returned the knife to James' shack so the hunter would be suspected of the crime. He saw it had begun to rain when he left the shack, and when the returned to the campsite, the bonfire had been extinguished, and his fellow scouts were awake and staring at their deceased Scoutmaster.

Later, at the courthouse, Judge Hall asked Isaac if he had anything to say on his behalf. The former Eagle Scout stated that he felt remorse for killing his Scoutmaster, but glad that he wouldn't hurt anyone else again. The judge then sentenced him to 15 years in jail with a chance for parole in 7 years, hoping he would learn what could have done differently in the meantime. 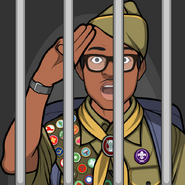 Isaac, sentenced to 15 years in jail with a chance for parole in 7 years for the murder of Connor Sullivan. 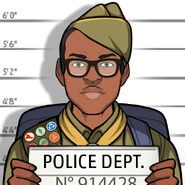 Retrieved from "https://criminalcasegame.fandom.com/wiki/Isaac_Weston?oldid=408409"
Community content is available under CC-BY-SA unless otherwise noted.