Irving was a 52-year-old doctor. He was also the author of a psychotherapy book entitled Shock Therapy per the events of The Conspiracy. He had short black hair and wore a gray vest with pinstripes over a white shirt stained with blood. He was seen with a stethoscope around his neck. Furthermore, Irving knew anatomy, had seen Phantom of the Cabaret, and drank coffee.

Irving became a suspect after the player and Isaac found a bottle of chloroform belonging to him. He said he treated it to the girls at the Moulin Rose, considering the plentiful amounts of disease and mistreatment to be had in Sinner's End. When asked if he was aware of the recent murders, including Gladys's, he said he was and lamented over the life of a prostitute being nasty, brutish and short.

Irving was spoken to again about his medical records, which detailed how he did not sedate his patients during surgery. He did not even bother to hide it, saying he did not do anything those women did not deserve. When asked what they "deserved", Irving said women were naturally sinful, drawing similarities to Sinner's End and its numerous brothels and cabarets. He looked down on all women, calling them nothing short of a plague on Sinner's End.

Despite his grisly views, Irving was found innocent after the team arrested Fiona Flanagan for Gladys's murder on top of several others committed under the guise of the Scarlet Slayer.

Irving was found electrocuted to death in his office in Gryphon Sanctuary. Per Dick, he was left in the electroshock machine for a long time and was exposed to dangerously high voltage, which effectively fried his brain. He also bit his tongue in the process, accounting for the blood in his mouth. He also found smudges of plant fertilizer on the victim's wrists, presumably left there when the killer held him down, confirming that the killer gardened.

Irving agreed with asylum director Gregory Stravinsky's beliefs that the hospital's treatment of patients was too lax. Despite this, Irving constantly undermined his authority, saying that he would take over the hospital one day, angering him. In contrast, Irving disagreed with Sylvia May's more caring approach; Sylvia confronted Irving for being especially harsh to the female patients, his response to which was to hit her and threaten to lock her up. Patient Dwayne Reed thought that Irving was conspiring to steal his mind, wearing a tinfoil hat for protection which Irving confiscated. Irving restrained another patient, Patricia Rochester, with a straitjacket and put her in solitary confinement, which she claimed that he did because he was scared of her knowledge. Irving also took care of interned child, Alice Riddel, who grew mad at Irving for telling her that her imaginary friends were fake.

The killer turned out to be Dwayne.

After admitting to the murder, Dwayne said that Irving wanted to lobotomize, or cut away, parts of Alice's brain. Not wanting that to happen, Dwayne lunged at Irving during his electroshock session and hooked him up to the machine and set it to the highest setting as possible and left him there. In court, Judge Lawson confirmed his accusations and had forensic psychiatrists determine if he was responsible for his actions and administer therapy to him. 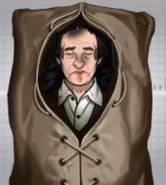 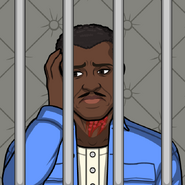 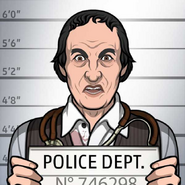 Retrieved from "https://criminalcasegame.fandom.com/wiki/Irving_Blackmoor?oldid=535492"
Community content is available under CC-BY-SA unless otherwise noted.