Irina Phelps was the killer of intern Gail Harding in Innocence Lost (Case #19 of Grimsborough).

Irina is the 26-year old business partner of Derek Molina. She has long blonde hair and green eyes. She is seen wearing a khaki suit over a blue-green tartan flannel shirt and sporting maroon lipstick. It is known that Irina takes energy drinks and uses cocaine.

Irina was first interrogated after Jones and the player interrogated Derek to see if she knew the victim. Irina said that she knew Gail, and that they were together before Irina left early, in which she thought the killer killed Gail when she left.

It was then revealed that Irina was the killer. Irina thought that the victim died of an overdose. Not wanting her and Derek's reputation to be destroyed, she buried Gail in concrete without knowing the victim was still alive.

Judge Hall then sentenced her to 10 years in prison with a possibility of parole in 5 years. 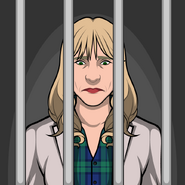 Irina, sentenced to 10 years in jail with a chance for parole in 5 years for the voluntary manslaughter of Gail Harding. 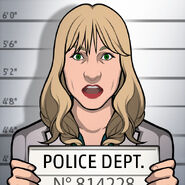 Retrieved from "https://criminalcasegame.fandom.com/wiki/Irina_Phelps?oldid=500133"
Community content is available under CC-BY-SA unless otherwise noted.