In Love and War is a case featured in Criminal Case as the thirty-sixth case of Mysteries of the Past (Season 4) and the two-hundred seventh case overall. It is the final case to take place in the Crimson Banks district of Concordia.

Previously, Giulietta Capecchi reported to the police that her mother Franca had placed a bomb at the train station. Maddie and the player went there and found the bomb beside the dead body of Seamus O'Neill. The player defused the bomb before starting the murder investigation.

The team then quickly arrested Franca for the attempted bombing. Giulietta was soon spotted in her family's old, burned down house. Afterwards, an armed Giulietta demanded for her mother so that she could kill her. The team later found enough evidence to arrest harlot Adrienna Brassiere for the murder.

Adrienna denied involvement at first but then admitted to the murder. She said that she knew of Seamus's affair with Giulietta, which she saw as him betraying the gang. Angry, she bashed his head in with a standing ashtray. To set an example for the rest of the Italian and Irish gangs, Judge Lawson sentenced Adrienna to life in prison.

Post-trial, Isaac and the player talked to Adrienna, who admitted that the Irish gang was definitely in shambles. However, she said that she suspected Franca was hiding something in the old Capecchi house. There, they found Vittorio Capecchi's notebook, which Evie said was proof that Vittorio was meeting with a certain Rochester to talk about his illegal land-selling scheme in Coyote Gorge. They talked to Franca, who only warned them about the Rochesters' power.

After Maddie and the player ensured that Giulietta was alright, Mayor Cornelius Castletown decided to lift the city's alcohol prohibition due to loss of revenue and alcohol related crimes. The Squad then moved to Wolf Street to investigate the Rochester family. 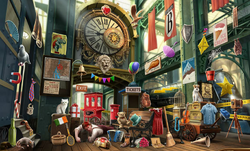 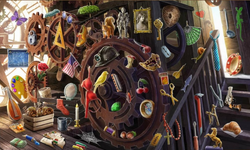 Porch
Add a photo to this gallery

Retrieved from "https://criminalcasegame.fandom.com/wiki/In_Love_and_War?oldid=443283"
Community content is available under CC-BY-SA unless otherwise noted.