Ilya was a diamond magnate with graying brown hair, gray eyes, and a beard. At the time of his death, he wore a black suit accompanied with a brown tie embedded with diamonds.

Ilya was found hanging by his tie on one of the train cars. According to Angela, he received a blow to the head which stunned him. She confirmed that he was strangled to death by being hanged with his own tie. She managed to find traces of tobacco on the victim's tie, but the Ilya's lungs were clear of smoke. This meant that the killer smoked cigarettes.

Conductor Nikita Rukhin said that Ilya took the first-class train often as the diamonds he were handling were mined in Siberia. As Ilya's business were against his communist principles, Nikita had sent a death threat to Ilya. Ilya was dating figure skater Nina Rodionova, who had gotten pregnant with his baby, much to his anger. Protester Agrafena Raskolnikova was against Ilya, deeming him an "oligarch" and suspecting him of shady dealings, to the point of her making a fake bomb to scare Ilya. Mammoth enthusiast Vadim Efremov was also mad at Ilya after his company destroyed a mammoth excavation site. Meanwhile, Ilya was making donations to COSMORUS but was planning to stop his donations, much to COSMORUS head Natasha Romanova's displeasure.

The killer turned out to be Nikita.

Nikita denied the accusations but then admitted to the crime. Believing that Ilya's diamonds should belong to the people, Nikita had stolen the diamonds and delivered them to communist hands in China. When Ilya found out, he confronted Nikita, who knocked him out and hung him by his tie. Via a video-call trial, Judge Adaku sentenced him to 25 years in jail. 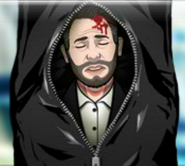 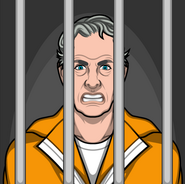 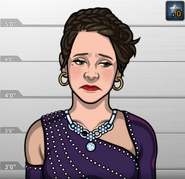 Nina Rodionova, Ilya's girlfriend.
Add a photo to this gallery

Retrieved from "https://criminalcasegame.fandom.com/wiki/Ilya_Tretyakov?oldid=463869"
Community content is available under CC-BY-SA unless otherwise noted.