Ignatius Dupree was a suspect in the murder investigation of his nephew, waiter Lee Dupree, in Bayou Blood (Case #6 of Pacific Bay).

Ignatius is a 57-year-old gumbo chef who sports standard chef attire with his chef hat covering his gray hair. Ignatius can be seen carrying a stained ladle on his right hand, has stains on his chef shirt, a shrimp on top of his chef hat and red suspenders. It is known that Ignatius is in contact with shrimp, chews tobacco and uses foot cream.

Ignatius is the owner of the Gumbo Jumbo seafood restaurant in Bayou Bleu.

After Frank and the player restored an employee card revealing Lee working at the Gumbo Jumbo seafood restaurant, prompting the team to investigate the terrace of the seafood restaurant, the team found a timer inside the cook's jacket but, when Ignatius woke up, he was mad because the police was touching the timer, but the police wanted to inform Ignatius that his nephew was dead. Ignatius was shocked because he wondered what he needed to tell his mother as Lee's mother required Lee to work for Ignatius to stay out of trouble, but Ignatius felt he failed after realizing Lee was murdered.

Ignatius was approached by the police a second time when Yann found shrimp juice and Lee's blood on the third skewer not to mention foot cream from the killer laid in the hilt of the BBQ Skewer, registering the object as the murder weapon. Frank went to accuse Ignatius of attempted murder but Ignatius furiously countered that half of Bayou Bleu passed through Gumbo Jumbo's doors day by day, so anyone could've touched Ignatius's BBQ Skewers without his persimmon. Although Ignatius admitted that he had problems with his nephew (due to him being a natural bully), Ignatius said that murder was never the answer on his watch.

Ignatius was proven innocent once Shawna Knox was found guilty of first-degree murder, and in spite of Frank's protest of dining in the Gumbo Jumbo restaurant, Yann expressed interest in Ignatius's proprietary gumbo recipe, and did a huge favor for Ignatius by providing super rare persimmons needed to augment Ignatius's gumbo supply. Yann wanted to deploy Ignatius's gumbo recipe for his wedding anniversary, but Ignatius required Yann to try his gumbo out before Yann could have the recipe, in which Yann agreed to enjoy. 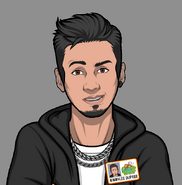 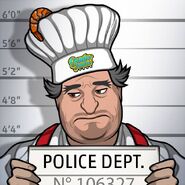 Retrieved from "https://criminalcasegame.fandom.com/wiki/Ignatius_Dupree?oldid=501371"
Community content is available under CC-BY-SA unless otherwise noted.