Ignatius Cottingley was the killer of socialite Philomena Highmore in The Talking Dead (Case #8 of Mysteries of the Past).

Ignatius is a 41-year-old medium. He has brown hair and a mustache and a mole on his left cheek. He wears a vermillion cape over a navy blue jacket, patterned ivy blue ascot, and a white shirt. He also wears a navy blue fez with an eye design and peacock feathers, a gold chain and several rings, one of which is a crow skull. It is known that Ignatius takes laudanum, supports the woman's vote and uses spirit boards.

Ignatius was spoken to again regarding a trick photo that was to be sent to him by the victim, depicting the later with a ghost that was actually her in disguise. Though he was not sure why she sent it, it did not surprise him since he thought the victim did not believe in the spirit world. Philomena was being a nuisance to him, so much so that he had to call a break during the séance, and it was during that break the victim was killed.

In the end, it was proven that Ignatius was behind Philomena's murder. After denying the charges, Ignatius said that he killed Philomena. He said that Philomena found out all the tricks he used as a medium to fake conversations with the dead. Fearing that she would expose his fraud during the museum séance, he paused the event, followed her into the garden, and slashed her throat with an obsidian knife. Judge Takakura sentenced him to 25 years in prison for the murder and for conning the public. 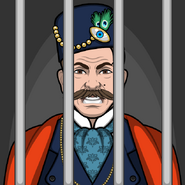 Ignatius, sentenced to 25 years in prison for the murder of Philomena Highmore and for his fraudulent business. 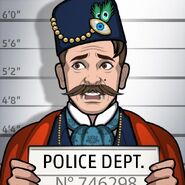 Retrieved from "https://criminalcasegame.fandom.com/wiki/Ignatius_Cottingley?oldid=427652"
Community content is available under CC-BY-SA unless otherwise noted.