Ignacio is a 63 year-old antiquarian and art collector with graying brown hair. He dons a white shirt and sky blue tie underneath a plaid copper brown suit. He has two moles and wears glasses.

In his first appearance, it is known that Ignacio smokes, reads Jorge Borges, and drinks mate.

In his second appearance, the design of his shirt slightly changes. It is known that Ignacio has read Rayuela de Ficciones, smokes cigars and drinks coffee.

Ignacio became a suspect after the player and Michelle found Spanish doubloons at the mountains where the treasure was, which according to Dupont, were given to him by the victim. He recognized Michelle, since they both worked for SOMBRA at one point. The doubloons were given to him as payment so the victim could have his hand in looking for the treasure which inspired his latest book. When informed that it was a SOMBRA cache, Ignacio said he had nothing to do with it and he had no idea why his doubloons were there.

Ignacio was spoken to again about a statue he was given as payment to stop Ernesto from "digging into the past". He said he could not remember who gave him the statue, but when Michelle brought up SOMBRA again, he said he never had them in mind. He said he simply stopped helping the victim when someone made a higher offer than the victim to stop, and that he did not kill him, especially on SOMBRA's orders.

Despite his links to SOMBRA, Ignacio was found innocent after the team incarcerated Lorena Pratx for Ernesto's murder. However, Jack and the player had to speak to him again about the location of some SOMBRA documents. Though he tried to avoid the question, he confessed that though he asked Lorena about the cache, she told him to mind his own business. He also said the contents would never reach the city, meaning she destroyed them in the mountains. This prompted them to search the mountains again, hoping something was saved from the fire.

Ignacio became a suspect again after the player and Carmen found his skin cells on an antique coin at the town square. He was shocked at first, but said it was not surprising since SOMBRA does not like traitors. But he insisted he had nothing to do with Michelle's death, saying he liked beautiful things, and Michelle was one of them.

Ignacio was interrogated again about suggestive messages he sent to the victim. He did not bother to hide it, saying he was much more worthy of her than The Bureau ever was. Carmen was angered at how much of a stalker he was, but he said she was an addiction, something that he could not shake off at all. The only reason he worked with SOMBRA was to get closer to her, and the pain he felt when she left for the Bureau was unbearable. When Carmen suggested that he was responsible for her death, Ignacio said she would still be alive if she never joined the Bureau.

Despite his stalker-like attraction to the victim, Ignacio was found innocent again after the team incarcerated Arsenio Castillo for Michelle's murder. It was also reported that Ignacio was arrested for his cooperation in SOMBRA's schemes as well. 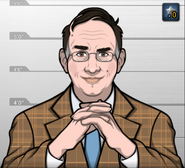 Ignacio, as he appeared in Murder, He Wrote (Case #44 of World Edition). 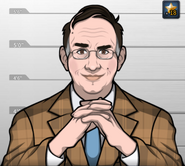 Ignacio, as he appeared in The King's Shadow (Case #48 of World Edition). 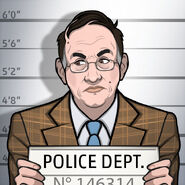 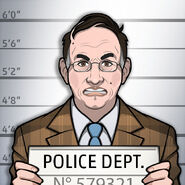 Retrieved from "https://criminalcasegame.fandom.com/wiki/Ignacio_Muñoz?oldid=430231"
Community content is available under CC-BY-SA unless otherwise noted.