I Spy a Mummy

I Spy a Mummy is a case featured in Criminal Case as the one-hundred twenty-fifth case of the game. It is the tenth case of the game's World Edition (Season 3) and also the fourth case to take place in the Sahara Region.

The Bureau chased The Sword to Egypt. Jack and the player investigated the Giza Pyramids, where they found the mummified body of fruit vendor Afif Wahab.

During the investigation, Ingrid reported the presence of a spy in a nearby hookah bar. Later on, Asal Hawaa, the belly dancer they had met in Morocco, revealed herself as a Mossad agent and threatened the team. She also said she was spying on Afif because the Mossad suspected him of being a SOMBRA agent. Despite the tensions, the team gathered enough evidence to arrest Zarah Salah, the Minister of Antiquities, for the murder.

After denying involvement, Zarah admitted to the crime. She wanted to steal ancient artifacts from the pyramids to make profit out of them, but Afif was always one step ahead of her. She bribed him to make him refrain from stealing the antiquities, but Afif refused. Wanting to eliminate the competition, Zarah lured Afif to one of the pyramids and mummified him alive. Judge Adaku sentenced her to 50 years in jail.

Post-trial, Jack and the player asked Asal for information about SOMBRA. Asal agreed to share some information if the team passed a trust test she made for them, which was to retrieve a spying device she had left at the pyramids. Once the team accomplished the test, Asal revealed that SOMBRA was a worldwide criminal organization with cells in every continent, with the Promethian Cult being their European branch. The team deduced that The Sword was aiming to unite the rebels into one cell in the Sahara.

Meanwhile, Jonah Karam suggested ambushing The Sword by contacting their arms dealer under the guise of rebel leaders, prompting the dealer to inform the assassin about the team. At the hookah bar, the team found a black book which (per Elliot) belonged to Seamus Cummings, one of the most ruthless arms dealers in the world. Elliot also found out per a plane ticket that Seamus was in Dubai. Supervised by Jonah, Elliot called Seamus and arranged a meeting in the United Arab Emirates.

After the meeting was arranged successfully, the Bureau picked up their disguises and boarded a plane to Dubai to find Seamus.

Jonah Karam
Add a photo to this gallery 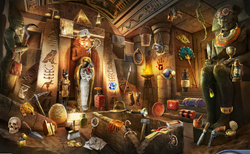 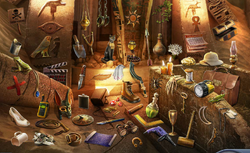 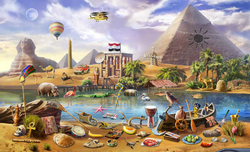 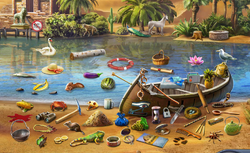 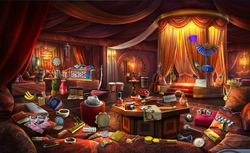 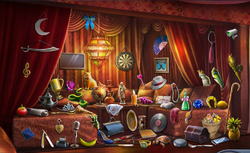 VIP Area
Add a photo to this gallery

Retrieved from "https://criminalcasegame.fandom.com/wiki/I_Spy_a_Mummy?oldid=409061"
Community content is available under CC-BY-SA unless otherwise noted.