Mayor Howard Johnson, appearing as a recurring character in Season 1 of Criminal Case, was a suspect in the murder investigations of four people in Grimsborough. He also made minor appearances in six other cases until his arrest in There Will Be Blood (Case #56 of Grimsborough) for being a member of The Crimson Order.

Howard is a 60-year-old man with dark gray hair only at the sides and back of his head. He has brown eyes and pale lips. He most commonly wears a black suit with a small USA flag on the left collar. Underneath the suit, he wears a white shirt with a maroon tie.

In his first suspect appearance, the small USA flag on the left collar of his black suit was replaced with a memorial poppy and his tie with a bowtie. It is known that Howard read The Prince and plays tennis.

In his second suspect appearance, he ditches the memorial poppy and it is discovered that he is on antidepressants and had plastic surgery.

In his third suspect appearance, he wears a "VOTE RED" badge in place of his memorial poppy and it is revealed that he wears riding boots and smokes water pipe.

In his fourth suspect appearance, he replaces his "VOTE RED" badge with an "I VOTED" badge on the left collar of his shirt. It is noted that he is right-handed.

Howard was the mayor of the city of Grimsborough.

The player was introduced to the Mayor in mention at the start of Into the Vipers' Nest when Chief King warned Jones and the player that he would be taking a special interest in this case. After Tony Marconi was incarcerated for Salvador Cordero's murder, the Mayor wanted to see the player at the Chief's office for a job well done, and told the Chief to promote the player to the Financial Center on his behalf.

During the investigation of Rachel Priest's murder, the Mayor asked the player to try to avoid ruffling with James Marsh's feathers in The Secret Experiments, but when Alden Greene was incriminated as Rachel's killer, Alden bubbled out his motives, causing him to expose General Marsh as a guilty man, penetrating through the politics of the Mayor. Realizing the player's tenacity, the Mayor promoted the player to the third district of Grimsborough, Historical Center.

The Mayor "chewed" on the team three times during Dog Eat Dog, in which he demanded what he called "a sordid affair" to be rectified swiftly, as knowing the importance of the Grimsborough Dog Pageant, he was not afraid to reprimand the Police Force if the situation was not rectified. However, the team saw the hidden evils behind Margaret Littlewood, secured the Dog Pageant, and with Grace seeing no further dangers inside the Pageant, the Mayor was able to run the pageant smoothly. In gratitude of ensuring a positive impact on the Dog Pageant, the Mayor then unlocked the youthful University district for the player to investigate.

The Mayor mentioned during the investigation of Madison Springer's murder that his approval ratings would sink if the team did not apprehend The Rorschach Reaper and put an end on the killing spree that terrorized the University, and because the player ended the terror, he advanced the player to the wealthy district of Maple Heights.

In the midst of Howard Johnson's re-election campaign, the owner of the Livingstone Club, Jerry Bigwall, was murdered. Howard then revealed that Jerry was one of his top contributors and if he was re-elected mayor, then it would be thanks to him. Howard was in shock when the murder occurred, but the team told Howard to stay away from the cake for his own security, and due to the nature of the murder, Howard was forced to play tennis to keep his stress levels low. Howard told the team that Jerry would not support him in the current campaign due to some disagreement, but feared the Grimsborough News spreading speculations and accusations which would damage his campaign, and all it took in Maple Heights to hurt the reputation of one's-self to destroy someone.

Although the incumbent's campaign was saved when Mitchell Westville was indicted and detained for Jerry's death, Howard wanted the team to inspect the Garden Party to make sure no more dangers were imminent. The Blue Party left a hidden "Vote Blue" card in a bouquet of flowers for the Garden Party participants to look at, which annoyed Howard. Howard was ready to do anything to uphold the pride of the Red Party.

A Shot of Beauty

Howard appeared again after he gave a personal autograph on one of his campaign flyers to Kerry Ann Buxton. The team understood that the incumbent was busy with his re-election campaign, but in spite of his busy schedule, Howard told the team he saw Kerry Ann from time to time at charity balls, and as a mayoral candidate, he must always show sympathy to everyone.

The team was given a pile of papers regarding about Kerry Ann by Jamie Buxton in an act of cooperation. The team found a love letter to Kerry Ann, which meant that the Mayor had a crush on Kerry Ann. Howard apologized for the false testimony earlier on, but he told the team that Kerry Ann was the one who helped Howard's campaign out.

Howard would politely ask the player to secure his campaign by removing any exploits at the Peacock Suite minutes after professional wrestler Tom Norris was found guilty of Kerry Ann's death.

All the King's Horses

Howard had a campaign with Khalid Souleyman, Crowned King of Sultanistan, but when the King was found slain at the stables, Howard cursed himself that his campaign, career, and life would be over, and had to tender to Mohammad Souleyman, the King's son and now the new Crowned King, and the press.

When Howard was called into questioning, he told the team that he had to put up with the stress of Sultanistan government representatives, the president, and the team, and as the gift of Khalid's horse killed Khalid, Howard refused to ride because he believed that the horse would haunt Howard for the rest of his life. Howard was actually questioned because his campaign was being brokered by the Horse Riding League and Sultanistan, and the team wanted to know if Howard was aware of having his campaign brokered by those two parties, something Howard would not be willing to put up since being sponsored by Sultanistan would constitute as income from a foreign nation, which were grounds for Howard's impeachment and ejection from office.

Howard was once again questioned immediately after Tony Marconi admitted to the team about his Saturday release plan, but before the team said a word, Howard told the team that Mohammad's embargo threats would have an adverse effect on his campaign, but was caught daydreaming when he smoked a hookah (water pipe). Howard also told the team that he had to put up with report after report that his pressing time-sensitive obligations gave him either little or no time to read those reports, but he would not be willing to seek favors from a mobster like Marconi.

In spite of the Khalid Souleyman and Tony Marconi affairs, Howard was found innocent after Hilda Tipton was found guilty of Khalid's murder, detained by International Authorities to face trial at the International level.

Adam Bentley, a forerunning socialite of Maple Heights and apparent outsider, was shot dead in the Red Party office. Howard was interrogated the instant Jones and the player found Adam dead, but Howard wanted to prove, even using history, that he was innocent, even if Adam was spotted in the Red Party office executed. Howard agreed to talk to the police but did not want the press to crucify him, in which he feared that the press and the journalists were likely going to have a field day with Adam's death. Howard stated that he was framed because someone feared that Howard would win the elections for the fourth term as Grimsborough's mayor.

The team later found a document of Marconi's good behavior approved by the Mayor at the Red Party office and felt Howard was giving Marconi excessive special treatment. The discussion was heated as Howard did not appreciate Jones's manners and Howard, in spite of giving Marconi special treatment due to good behavior, told the team in anger that he did not cause bloodshed on Adam.

Howard would eventually be re-elected Mayor, securing another term in office, but when the team found a flyer with Martha's name on it, and after Martha was accused of working with Howard allegedly (not to mention the team grilling her about the flyer), the team wanted to talk to the Mayor once more. Howard told the team that he tore up Martha's speech because he received two versions—one with his name and the other with Martha's name on it, something Jones felt motivated Howard to kill Adam, but Howard told the team for the third time that he would never commit any bloodshed in his name at all, and Howard told the truth at the climax of the investigation but at a cost: Chief King was incriminated as Adam's killer and felt guilty for his actions, and thus decided to commit suicide as punishment for his recent actions, thus proving all suspects innocent.

Howard was at Samuel's funeral announcing that he was a great Chief Police Officer even though Samuel lost himself. When the team found King's Medal of Valor at the place where Howard was announced Mayor for another term, the team did not hesitate to talk to Howard on friendlier terms about it. Howard told the team that Samuel received the Medal of Valor when he started his political career and when Samuel was just an inspector. Samuel arrived at a burning building knowing that the Grimsborough Fire Department would be too late and opted to save a child trapped in a burning building, something Howard could not reconcile with Samuel killing Adam. Howard took some time to tell the player to retain the flame which made the player one of Grimsborough's top cops, and officially wanted to thank the player for solving more than 50 murders and placing countless criminals in jail, and Howard expected the player to keep the flame to do good as always in the future.

Howard played a central role in the case, even though he did not appear as a suspect. Howard intervened Serena's arrest by yelling at them for arresting Serena for ordering the hit on Adam Bentley, but the team told the Mayor not to obstruct the law, and reluctantly agreed.

Howard was arrested by the Grimsborough Police (inside the Order's hideout) when the team disguised themselves as Crimson Order members (during the Order's ritual) much to Howard's expectation to have the player's head on a platter as payback for the department putting his mother in custody alongside Alden Greene. In court, Howard was told that he chose to abuse his power as Mayor, as he was supposed to protect people and not destroy them; Howard, unlike his compatriots, saw no point in defending his actions in front of Judge Hall. For his involvement in the Order's illicit activities topping 4 centuries, Howard was sentenced to life in jail under solitary confinement and was removed from office. 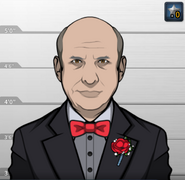 Howard, as he appeared in Blood and Glory (Case #42 of Grimsborough). 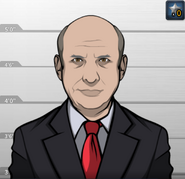 Howard, as he appeared in A Shot of Beauty (Case #45 of Grimsborough). 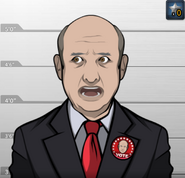 Howard, as he appeared in All the King's Horses (Case #49 of Grimsborough). 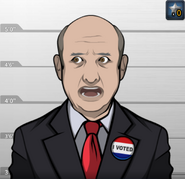 Howard, as he appeared in It All Ends Here (Case #51 of Grimsborough). 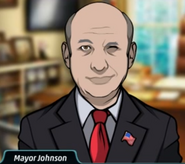 Howard, as he appeared in every last case of a determined district. 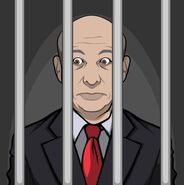 Howard, sentenced to life in jail in solitary confinement for being a member of the Crimson Order. 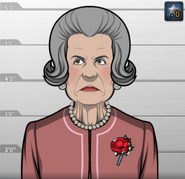 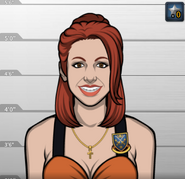 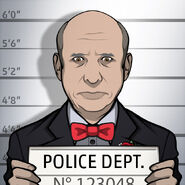 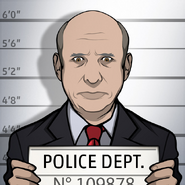 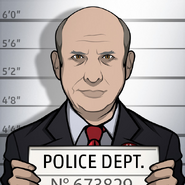 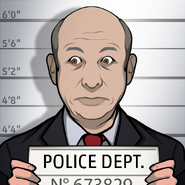 Retrieved from "https://criminalcasegame.fandom.com/wiki/Howard_Johnson?oldid=540487"
Community content is available under CC-BY-SA unless otherwise noted.