Dr. Howard Haggard was a suspect in the murder investigation of archaeologist Burt Montana in Temple of Doom (Case #40 of Pacific Bay).

Howard is an 81-year-old history professor with blue eyes, messy gray hair, gray mustache, and gray beard. He is seen wearing a white shirt underneath a brown polka-dotted bow tie and a tan jacket, and he is often seen carrying a bunch of ancient scrolls. It is known that Howard eats red chili peppers and knows Aztec and astronomy.

Howard found himself in trouble after Amy and the player found an Aztec statue with a note. The note had the following message, "If I'm dead, ask that damn professor!" written on it. Digital intervention, courtesy of Hannah, was required before Howard was sent for questioning for the first time, but not without notating about a feud Dr. Haggard had with Burt prior to the interrogation.

Amy thought Dr. Haggard was crazy for attempting to blow up an ancient temple but he had to use dynamite to stop Burt from retrieving the Aztec statue. Burt retaliated by threatening to revoke his PhD from his credentials if he did not stop following the archaeologist, but in spite of Howard being a strong suspect, he was found innocent. 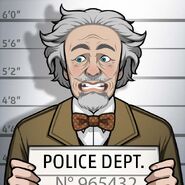 Retrieved from "https://criminalcasegame.fandom.com/wiki/Howard_Haggard?oldid=437482"
Community content is available under CC-BY-SA unless otherwise noted.