Howard Boehner was a suspect in the murder investigation of Mayor Annette Arbor in Uncivil Rights (Case #47 of Pacific Bay).

Howard Boehner is a 49-year-old politician who ran for mayor of Innovation Valley, but lost to Annette Arbor. He wears a suit with a red tie, a red badge with a rhino on it, and a handkerchief in his pocket. It is known that Howard is a gambler and knows mechanics.

Frank and the player first talked to Howard after finding an ad for his political campaign on the crime scene. He was shocked to hear of Annette being murdered, though he admitted she had her share of enemies. Howard explained that he and the victim were nothing more than political rivals, but he thought her ideas were misguided. He suggested that the player look into the mayor's robot act, as it made many workers believe Annette did not care if they became unemployed.

Howard was due for another interrogation once the player and Frank found an article saying Howard would crush the mayor. He replied saying he did not kill her, but was mad she won the election. He went on to explain that people like Annette have it easy when becoming mayor, while people like him have to work to get where they are. Howard explained that the victim won not because of her promises for equal rights for robots, but because she revealed his gambling problem.

In the end, Howard was found innocent after the team incarcerated Larry Newark for Annette's murder. 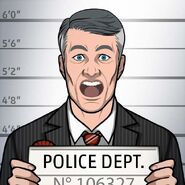 Retrieved from "https://criminalcasegame.fandom.com/wiki/Howard_Boehner?oldid=413637"
Community content is available under CC-BY-SA unless otherwise noted.