Holly is a 38-year-old gossip columnist primarily operating in Ivywood Hills. She has blue eyes and a long blonde ponytail that goes over her left shoulder, wears red lipstick and green nail polish, and often carries a pen and notepad along with her.

In her first appearance, Holly dons a purplish-pink shirt with a pair of golden sunglasses tucked in and a golden emblem of an infamous cult on the right side. Given her profession, she is seen wearing a phone earpiece on her right ear, completing her look with a white bangle. It is known that Holly drinks protein shakes, drives a convertible and uses teeth whitener.

In her second appearance, she wears blue makeup and sports a blue ribbon tied to her ponytail. In addition, she has a visible acid burn on her neck.

In her third appearance, Holly wears a green top accompanied by a black bowtie in the middle – also getting rid of the blue makeup and ribbon, not to mention the acid burn, from the previous case, as well as her signature sunglasses and phone earpiece. It is revealed that she has a cold, knows Morse code and eats caviar.

In her fourth appearance, Holly puts on her signature sunglasses – also donning a fancy, black and gold dress along with a golden necklace and a black woman's hat. It is noted that she has seen A Puff of Death, takes Nevrax and is a Capricorn.

The Young and the Lifeless

Holly got herself in serious trouble after Frank and the player found a pair of sunglasses (repaired by the player) on the primary crime scene, although she admitted that those sunglasses were hers. Frank wanted to know as to why those glasses were on the scene of Felicia's murder, to which Holly replied that she wanted to write about the crime scene before anyone else. Frank did not like Holly's counter-productivity for reasons confidential to him. Holly admitted that she is a gossip columnist specializing in scandal stories, concluding that she did not have time to talk to the police.

Frank demanded Holly spill the beans as to why she saw the murder, but she refused to do so – claiming that it is her job to cover scandals as much as she can. In addition, Holly stated that she was currently working on a scandal story, but Frank told her she needed full permission from the Chief before doing so since the police didn't know anything about the victim. This prompted the gossip columnist to identify the murder victim as being Felicia Steppingstone, a star of a reality TV show called "Pretty Simple Life." Furthermore, Holly suggested the team to investigate the Imperial Theater as she believed that was where she last saw the victim.

During a recap of the murder investigation, Amy waltzed in only to attract Holly, which garnered negative attention from Frank – who then told Amy to retreat for the shift, and in turn told Holly to wait in the interrogation room for additional questioning, but the gossip columnist suggested the team to investigate the nearby pool party scene in claims that she had seen Felicia there for a premiere of her TV show.

Frank told Holly that it's a felony to exploit a police officer for the tabloids, but the columnist assured that she was just doing her job in spite of Frank's reservations. Holly had to come up with reasonable stories since her reader base drastically declined and among them was that the magazine company she worked for wanted someone younger to replace her in spite of her claims that experience is what that magazine company requires.

Holly was found innocent after an ulterior motive was exposed to be the cause of the murder.

Holly found herself in trouble when the team found a Rex Logan's retrospective flyer inside a Utopian merchandising box, which mentioned that a certain "Sister Alpaga" was going to be in charge of the presentation. After tedious hours of analysis, Hannah deduced that "Sister Alpaga" was Holly's Utopian nickname. This prompted Amy and the player to grill the gossip columnist.

During the conversation, Holly claimed that the Utopians were obviously involved in Rex's retrospective since the late actor was a Utopian success story. She expressed her sadness towards Rex's absence to a speech he was going to give about how being a Utopian changed his life, but then erased her wince to ask the player to join the Utopian faith.

The team needed to quiz Holly again after finding negatives inside a metal box with her name. After Hannah's careful analysis, it turned out that the negatives contained very graphic photos of Rex partying hard and that the photos were supposedly taken from afar, behind bushes, meaning spying work.

As Amy and the player intercepted Holly, she stated the photos were for the retrospective and not for an article the team suspected she was going to write; just moments later, however, the gossip columnist admitted that the Utopian leaders had asked her to buy the photos for the paparazzi to avoid having a Utopian success story being shown as a common party freak – which would ruin the Utopians' reputation as well as Rex's career. She then continued by stating that confiscating the photos caused Rex to become more confident and lose control of his behavior. Alas, Holly expressed happiness towards Rex's death due to beliefs that she couldn't have kept the actor's behavior a secret any longer, making her more suspicious by the minute.

Holly was ultimately found innocent after a wanton need to shine in fame turned out to be the reason for Rex's murder. However, her troubles were still far from over: after Russell and the player discovered a flyer announcing a planned brainwashing attack at the upcoming Ivywood Film Awards, also bearing a note by the Utopians to have Holly replace Rex as the ceremony's host, the duo had to confront the gossip columnist for a serious talk. Holly denied the brainwashing attack right away but admitted she was asked to be the ceremony host, an honor she would not turn down, even though the police remained suspicious given that Russell had reliable proof of the Utopian's brainwashing fiasco.

The Ship of Dreams

Holly was flagged as a murder suspect once again after the player found an initially torn issue of the Girly Gossips magazine showcasing her story about the movie set of Gigantic, found inside the flat of victim Fabrizio Gallardo. After being called into the police station to discuss about the magazine issue, Holly claimed she had nothing to do with the murder as she was the first reporter to do an article on the upcoming movie Gigantic, thereby concluding that she cared more about the movie rather than cooperating in a murder case.

Shortly afterward, Holly distributed her propaganda on TV, suggesting that anyone who refused to stand with the Utopians were against peace and would be susceptible to murder. This prompted the inquiring team of Frank and the player to call her into the interrogation room once again.

Although she had just used someone's death to promote something, Holly showed stiff beliefs of Pacific Bay being part of a free country, before flagging herself as a proud Utopian and referring to Fabrizio for staying away from the Utopians.

Holly was eventually found innocent, but things would not end there: after the police found Maggie O'Mally and Chief Marquez in a brainwashed state over just a period of minutes, Russell and the player had to ensue an inquiry. The duo found a picture of Chief Marquez which the player forensically dusted to reveal a plan to brainwash the top police official. Russell then had to spend hours analyzing the writing on the picture, thus revealing that it was was too neatly written even though the message was meant to be a threat – meaning this was the doing of a control freak, someone used to writing quickly and efficiently. This discovery made by Russell left him and the player with just one thing in mind: Holly.

Cornering Holly, Russell and the player accused her of brainwashing at least six people (including Maggie and the Chief) and also held her responsible for the planning of a terrorist attack scheduled to take place at the the Ivywood Awards. Holly, in a rather quick and suspicious manner, admitted her brainwashing fiasco and took a moment to claim that she'd succeeded to her predecessor as the Utopian leader seven years prior to the present day, before finally "shooting herself to death" in a bold attempt to resist arrest and to protect her cult.

Moments after the disastrous event, Russell insisted that the player keep an eye on the imminent Ivywood Awards ceremony just in case the Utopians still had something in mind – though he would find a cure to heal Chief Marquez from the brainwashing effects in due course.

About a week later, with the Ivywood Film Awards scheduled to get under way in just a few hours, the notorious Utopians – even without Holly in the picture – were ready to implement their devilish scheme: to recruit new followers and fulfill the "Prophecy" through a brainwashing attack intended to affect millions of viewers watching the ceremony's live broadcast, by simply replacing the original tape with that of a certain brainwashing film. Hours before the ceremony, however, the inquiring team of Amy and the player would stumble upon a murdered Tyler Snakes at the Awards Theater entrance – though he was a Utopian as well as the person in charge of supervising the Awards ceremony.

As the murder investigation progressed, Hannah managed to retrieve a text message – not to mention a call – sent by Holly to Tyler just moments before his death, thereby deducing that Holly's suicide was nothing more than an act. Hannah would also intercept Holly's call on the victim's phone from the Ivywood Heights Hotel, only to find the gossip columnist dressed up as a socialite to keep a low profile.

The cover did not work very well as Amy and the player were wise enough to expose Holly right on the spot before sending her to the interrogation room at once, where the columnist disclosed that she had to lay low for a while (due to the unbearable stress) and that all it took to make sure that happened were some special effects to stage her suicide (which consisted of a good make-up artist, and two friends disguised as paramedics). When asked why she kept on texting Tyler, Holly responded that she had to remind him who the Utopian leader was from time to time in order to put the movie producer in his place.

In the middle of the case, after Amy was shockingly found in a brainwashed state (which incapacitated her for the remainder of the investigation), Russell opted to take a stand to help the player out. Shortly afterward, the duo found an article inside Holly's purse, bearing a note (from Tyler) suggesting that the columnist should have killed herself for real. This prompted yet another interrogation, under which Holly stated that Tyler was never a threat – but Russell had to change the topic in order to request her cooperation in stopping the brainwashing epidemic, to which Holly refused as she believed that the "Prophecy" of the Utopians would soon prevail.

Holly was eventually found innocent of Tyler's demise; however, after the police succeeded in confiscating the Utopians' brainwashing tape (thus curing Ivywood of the epidemic), she would be arrested once and for all for being heavily involved in the the cult's illicit endeavor. 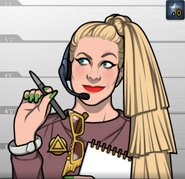 Holly, as she appeared in The Young and the Lifeless (Case #31 of Pacific Bay). 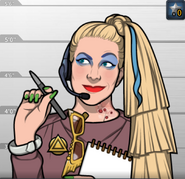 Holly, as she appeared in Star Crime (Case #35 of Pacific Bay). 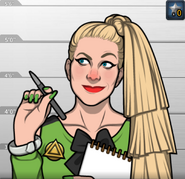 Holly, as she appeared in The Ship of Dreams (Case #37 of Pacific Bay). 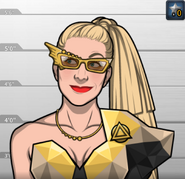 Holly, as she appeared in Dead Carpet (Case #38 of Pacific Bay). 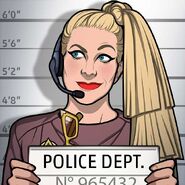 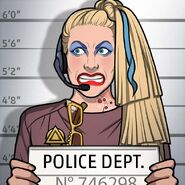 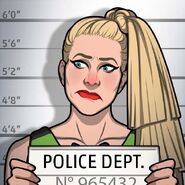 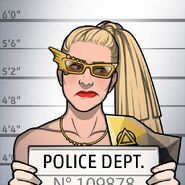 Retrieved from "https://criminalcasegame.fandom.com/wiki/Holly_Hopper?oldid=430232"
Community content is available under CC-BY-SA unless otherwise noted.