Herman Jeffries was a suspect in the murder investigation of botanist Wendy Stokes in In Cold Blood (Case #35 of The Conspiracy).

Herman is a 49-year-old nurse working for DreamLife. He has graying black hair, green eyes as well as wrinkles. He is seen wearing a blue V-neck T-shirt with a pocket, which has a thermometer and two pens inside. Additionally, his T-shirt is adorned with an ID badge. Furthermore, Herman is seen holding some DreamLife documents. It is known that Herman has dandruff, is a climber and drinks iced tea.

Herman was spoken to again after the team found out that he had sent a note warning to the victim about being "strapped to that chair". When being asked about this, Herman told the team that it was a misunderstanding and that he was just worried about Wendy's health. He then explained that he did weekly health checks on all DreamLife employees and was able to find out that Wendy was stressed as her blood pressure quickly rose. In the end of the conversation, Gloria hoped that Herman did not go further than writing a warning to the victim.

Although Herman was found to be innocent of Wendy's murder directly after the team found out that Rosie Summers was Wendy's killer, it was revealed that he had given Rosie Protozane before she killed Wendy. When being asked about this, Herman admitted that he was tasked to administer Protozane to the test subjects and to ensure their vitals did not crash. He then said that he did not know how the drug acted as he was never allowed to stay in the room. He also told the team that the scientists kept brain scans of the test subjects in an SD card shortly before they arrested him for being an accomplice to Wendy's murder. 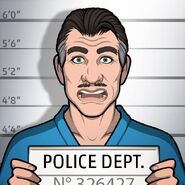 Retrieved from "https://criminalcasegame.fandom.com/wiki/Herman_Jeffries?oldid=508991"
Community content is available under CC-BY-SA unless otherwise noted.