Herman Cavendish was a suspect in the murder investigation of Chief King's old friend, Stuart Huckabee, in A Brave New World (Case #52 of Grimsborough).

Herman is a 68-year-old fisherman. He wears an oilskin coat over a blue-white striped t-shirt. He has a pipe poking from his mouth and also has a really bushy beard and moustache. He also wears a black leather hat. It is known that Herman eats oysters and uses a metal detector.

Jones and the player went to investigate Herman Cavendish's land as it was declared a crime scene due to Stuart Huckabee found with his throat slashed and his tongue pulled to cover the wound. There, a painting of a pilgrim ship was found shattered not far from Stuart, and the team managed to restore the painting. Herman was not too happy about what the team was doing but the team told Herman that his land became a scene of crime where a murder occurred, not to mention that a painting became a part of a murder investigation.

The team told Herman to calm down as they were investigating Stuart's murder, and even went far to inquire about a painting that became a part of the murder investigation—Herman stated that the painting was the pride of the Cavendish clan for four centuries. Herman wanted to tell the tale of Captain Ishmael Cavendish but the team were time-pressed with a murder to investigate, but not without the team realizing that Ishmael docked the Pilgrim Ship in the Natural Harbor in the 17th Century, but that was where the murder of Pip Huckabee took place, and felt that the killer was trying to remove evidence that a murder occurred in 1642.

When the team realized that Pip and Stuart were from the same family, they wanted to talk to Herman again, but this time to make Herman aware that the pilgrim ship was a scene of a murder in the past—they were able to talk to Herman in friendlier terms, and Herman agreed to give the team any objects that would be of interest in them provided that Herman had them in his attic. The team were interested in a chalice and a broken sculpture in a crime scene from the past—both which Herman willfully gave to the team since he had them in his attic—which the team were able to unveil a family feud between the Huckabees and the McCoys, and the existence of The Crimson Order upon arrival of the Pilgrims in 1642.

After Stuart's younger sister, Susan Huckabee, was convicted of the gruesome murder, Herman was proven innocent. However, following Susan's indictment, the team wanted to consult Herman about a Pilgrim Coin with a suspicious symbol on it, but Herman told the team that the Cavendishes had nothing to do with the Crimson Order, neither the coin had any relevance to them. The team were told that the Pilgrims went through harsh times upon their arrival at the Natural Harbor, in which they discovered that some of the pilgrim families—namely the Kingsleys, shortened their names to King (for example) and per Herman some of the unknown pilgrim descendants forgot their pilgrim roots through time. 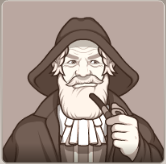 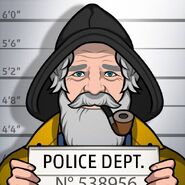 Retrieved from "https://criminalcasegame.fandom.com/wiki/Herman_Cavendish?oldid=408393"
Community content is available under CC-BY-SA unless otherwise noted.