Heidi Müller was a suspect in the murder investigation of her ex-boyfriend, Rochester heir Archie Rochester, in Tipping the Scales (Case #51 of Mysteries of the Past).

Heidi is the 22-year-old Swiss ex-girlfriend of the victim. She has tied-up blonde hair adorned with a daisy. She dons a navy blue dress with white ruffled collars and sleeves with floral designs.

Heidi became a suspect after Maddie and the player found her brassiere among the victim's belongings. She revealed that he was the love of her life and that they had met in Switzerland when he was a law student. She then said that he had urged her to come back to Concordia with him, and that he was a fine young man who had promised her a wonderful life.

Heidi was spoken to again about her one-way steamboat ticket back to Switzerland. She said that Archie had bought the ticket for her as he wanted her gone. She then revealed that he had changed when they arrived in Concordia and had turned arrogant and mean. However, she had hoped that he would change his mind, thinking that a gentleman wouldn't abandon a lady in a foreign land.

Heidi was found to be innocent after the team incarcerated Samson Drake for Archie's murder. 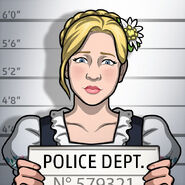 Retrieved from "https://criminalcasegame.fandom.com/wiki/Heidi_M%C3%BCller?oldid=415448"
Community content is available under CC-BY-SA unless otherwise noted.