Case #12: Payback (s2)
Heather Valentine was a suspect in the murder investigation of Daily Dawn editor-in-chief Vito Pioni in Killing Time (Case #16 of Pacific Bay). She also made minor appearances in two other cases in Pacific Bay.

Heather is a 24-year-old fashion columnist for the Daily Dawn newspaper, and the daughter of Chris and Ivy Valentine. She is also in a relationship with Hannah.

Heather is a blonde woman with green eyes and light tan skin. She has one orange strip on the left side of her hair. She styles her hair into a side ponytail. Apart from that, she dons a top with a beach-themed design printed on it and a pair of shorts. She also sports three green beaded necklaces and a gold hoop earring on her right ear. She has a beauty mark below her right eye and wears reddish pink lipstick. Besides that, she has a heart tattoo on her left shoulder, a dove tattoo above her right breast, and a "무사" (musa, roughly translating to "warrior") tattoo, just like Hannah's necklace, above a fish tattoo on her right arm.

In her first suspect appearance, Heather wears a brown sash on her right shoulder which consists of three badges: a green "NO WAR" badge, a yellow anti-nuclear badge, and a purple badge representing the "Peace" sign. It is known that Heather eats lasagna, drives a scooter, and drinks espresso.

At times during her third overall case appearance, Heather dons a pink winter coat along with an adapted-design scarf of her dress over her coat.

Heather was called to be spoken to when the team found a camera at the train station where reports of a fight had broken out. Hannah reviewed the camera's footage and was shocked to discover her girlfriend, Heather, had been involved in the fight. Hannah told the player that Heather was supposed to meet Hannah at the Deli and should not have been near the station. Hannah and the player went to the Deli and spoke to Myriam Miller, the owner of the Deli. Myriam told them she went by earlier and left her bag. Hannah found it and they found a restraining order against Heather from her own parents, Chris and Ivy. Heather's parents disapproved of Heather's life and her relationship with Hannah. They claimed she could not be their daughter unless she broke up with Hannah, therefore they filed a restraining order against her.

After Hannah analyzed Vito's phone containing a memo to fire Heather, Amy and the player had no choice but to treat Heather as a suspect much to Hannah's disapproval, but Amy told Hannah that rules cannot be broken even though Hannah is known to be protective of Heather.

Heather was displeased when Amy mentioned about Vito wanting Heather fired from the Daily Dawn based on Hannah's analysis of Vito's phone—in which Heather politely asked Vito not to write a story about Hannah who opted to end her anarchist life to become a respected tech expert for the Pacific Bay Police. The interrogation of Heather triggered a roller coaster ride as Chief Marquez alerted the team of Hannah's sudden disappearance—Hannah took matters in her own hands to prove Heather innocent of grand homicide but to no avail.

Heather was due for a second conversation with Amy and the player after Hannah found out Heather used Hannah's USB stick to upload a virus compromising all electronics in Inner City's Little Italy. Heather was unhappy about Pioni dropping the Hannah Choi article so Heather seized Hannah's USB stick and uploaded the virus to the Daily Dawn network, but to no avail. Instead of the virus destroying the Daily Dawn network like Heather wanted, it compromised all servers powering Little Italy's networks—but even though Heather was a serious suspect in Vito's murder, she was found innocent once the roller coaster ride occurred in the courtroom. Following the roller coaster ride, Heather and Hannah made amends to ensure Hannah would put Inner Chaos behind her and to take a much-needed break to alleviate the stress Hannah dealt with in the last 3-4 cases—a feat Chief Marquez wanted Hannah to do in order to ensure she would retain a positive impact in the police force.

Heather made a much less significant appearance in this particular case, somewhat helping the team of Amy and the player during their primary investigation of a premeditated murder.

She first appeared at the start of the case when Hannah gifted her a rose before the couple left to spend some quality time with each other at the Love Village, up in the mountains of White Peaks. Heather also took time to (playfully) tease Amy about the fact that the latter used to go to the Love Village to "smooch" Bobby Prince (Amy's high school sweetheart) when the two were in high school, which somewhat embarrassed Amy.

The player and Amy accompanied Heather and Hannah at the Love Village, but had to split up when the player's eye caught a foul act on the ice rink—which showcased the corpse of a popular ice skater named Juan Rodrigo Vasquez—and a murder investigation had to ensue.

Heather was generous enough to help out the team on two different occasions during the murder investigation. When she overheard the words "Mon Petit Chocolat" bubble out of Amy's mouth, she informed her of the chocolate line's founder, Charlotte Fontaine, who was then flagged as a suspect. Heather's second contribution was when she ended up leading the team to a certain Tiffany Neng, despite Hannah being empty on intel after the conclusion of her lab task. 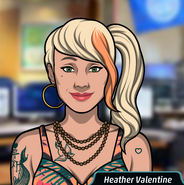 Heather, as she appeared in Payback (Case #12 of Pacific Bay). 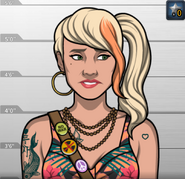 Heather, as she appeared in Killing Time (Case #16 of Pacific Bay). 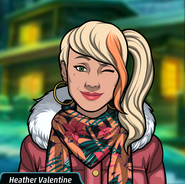 Heather, as she appeared in Hearts of Ice (Case #26 of Pacific Bay). 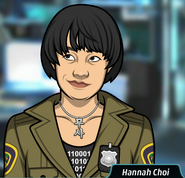 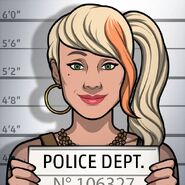 "Who's your favorite Criminal Case couple?"
Add a photo to this gallery

Retrieved from "https://criminalcasegame.fandom.com/wiki/Heather_Valentine?oldid=533149"
Community content is available under CC-BY-SA unless otherwise noted.