Hear My Cry is a case featured in Criminal Case as the sixth case of The Conspiracy (Season 5) and the two-hundred thirty-seventh case overall. It is the final case to take place in the Fairview district of Grimsborough.

Earlier, Gloria faked a fight with her son to lure the Rocket Cow Killer out of hiding. However, the plan had backfired after the killer abducted her instead. After Cathy was able to track her to the woods behind Fairview High School, Jones and the player went there, only to find Gloria gagged and bound, as well as the body of Edward Ramis, Julian's father, who was murdered by the serial killer.

Mid-investigation, someone snuck into the police station. Later, Julian told the team that Principal Rosamund Wilcox was having an affair with his father. The team eventually found enough evidence to find Principal Wilcox guilty of Edward's murder, the murders of at least eleven other parents (including David O'Connell, Emma Tank, and Barbara Litzke), and Gloria's kidnapping.

Upon admitting to the murders, Principal Wilcox said that she took her job in order to ensure the safety of the kids even if they had evil parents. When she saw that parents were screaming at their children every day, she decided that the only way to protect the children was to kill their abusive parents. In this particular murder, she had seen Edward screaming at Julian after finding out that he had sold marijuana. She then met up with him in the woods under the guise of wanting to rekindle their relationship, and proposed a toast. However, his drink was a mix of Rocket Cow and amlodipine, which gave him a heart attack. She later found Gloria arguing with Carter. Despite knowing it was a trap, she kidnapped Gloria anyway and intended to kill her in the woods but fled when she saw her tracker. Judge Powell sentenced Principal Wilcox to life in jail with mandatory counseling.

Post-trial, Jones and the player searched Wilcox's hideout to find the zoo's missing shipment of amlodipine. They only found an empty box, which (per Rupert) proved that a male accomplice had pretended to deliver the medication to the zoo but instead gave it to Wilcox. Upon reporting this newfound information to Chief Parker, she suggested the team go to the school to find out the accomplice's identity. There, they found a barcode scanner showing that bus driver Stewart Benedict had faked the delivery by forging Nathan Pandit's signature. They then arrested Stewart for partaking in the Rocket Cow Killer's crimes.

Meanwhile, Gloria and the player talked to Cathy, who said that someone on an anonymous hacker forum said they knew she was working for the police and sent "proof" to her. The two searched the station and found a box of mushrooms. Per Amir, the mushrooms were proof that the satellite that crashed into the Grimsborough forest a year prior was leaking radiation. Amir also found traces of Izzy Ramsey's DNA on the box. Izzy said she sent Cathy the mushrooms for her to test the radiation being emitted by the mushrooms. She also pointed to the existence of the dome in the forest and emphasized that nobody was certain about why they had to enclose the wreckage in a dome, giving rise to conspiracies.

After all the events, Jones reassured Gloria and the player that there was nothing to gain from snooping around in the forest, so instead, Jones suggested celebrating for finding the Rocket Cow Killer. Before they could leave for celebrations, however, a massive earthquake struck.

Greg Gibbs
Add a photo to this gallery 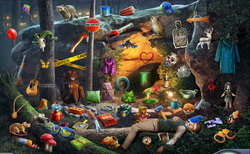 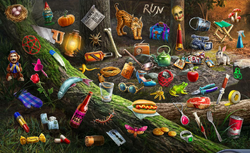 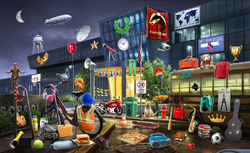 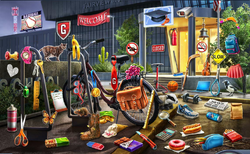 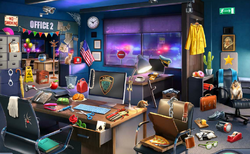 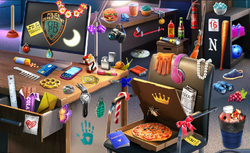 Police Desk
Add a photo to this gallery