Hazel Galloway was a suspect in the murder investigation of tomb robber Kayla Markham in I Lost My Heart in Xerda (Case #23 of The Conspiracy).

Hazel is the 22-year-old owner of her father's antique store. She has brown hair in a bun and brown eyes concealed behind a pair of glasses. She wears a pink patterned sweater over a white collared shirt and a white scarf tied like an ascot. She also has a scarf in the form of a deceased canine and white nail polish. It is known that Hazel is right-handed.

Hazel was spoken to again about her relationship with the victim. She revealed that, although Kayla's bravery had caused her to fall in love with her, she had never told her about her true feelings. She then said that she would give her right hand to see her again.

Hazel was found to be innocent after the team incarcerated Bruno Camper for Kayla's murder. 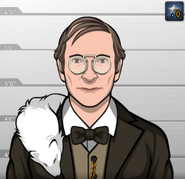 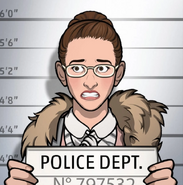 Retrieved from "https://criminalcasegame.fandom.com/wiki/Hazel_Galloway?oldid=430245"
Community content is available under CC-BY-SA unless otherwise noted.