Harvey "Ace" Fitchner was a suspect in the murder investigations of banker Coleen Truman in Easy Prey (Case #7 of Pacific Bay) and local girl Vanessa Kimmel in Smoke and Mirrors (Case #10 of Pacific Bay).

In his first appearance, Harvey sustains two warts on his right cheek. It is known that Harvey drinks rum and practices rifle shooting.

In his second appearance, the warts have healed and instead Harvey sustains a leech bite below his plaster. It is discovered that he knows fishing and eats spicy food.

Harvey first appeared when the player and Amy confronted him about a cash-stuffed kraft envelope, addressed to him, upon which was written a suspicious message: shut up and take the money. Amy pointed out that taking bribes was illegal, and Harvey replied he refused the offer, regardless of how badly Coleen Truman the addresser needed protection. When Amy blurted out that said addresser had been murdered, Harvey was not entirely surprised, and surmised that if she had been more respectful towards the people of Bayou Bleu, her death might have been avoided.

Later in the case, a drunken Harvey approached Amy and the player, threatening them with a gun and demanding they leave the bayou. But Amy refused to budge, drawing her own gun and demanding Harvey stand down. The drunken officer vowed to find Coleen's killer, knowing the victim often visited the nearby steamboat. He claimed that he would stop the murderer, citing he never missed with his rifle. Amy countered that he was in no condition to handle the case, Harvey finally relented, bemoaning his lowly lot in life. Sympathetic towards his plight, Amy demanded Harvey relinquish his gun while she and the player investigated the steamboat, promising to question him later.

When the team returned to interrogate Harvey again, he confessed that the envelope they found was not the only one he received. With an ashamed face, he admitted that he indeed took the money, citing "that devil" knew his weakness. Harvey continued by saying Coleen planned to force her way into the bayou, and that he shamefully agreed, threatening people he had known for years. With tears in his eyes, he confessed that he could not live with what he had done to the people he was entrusted him to protect.

Much later, after the real killer was found, Harvey was shocked to see the player with not Amy, but one of his old comrades, Frank. He asked his old friend why he had come, and Frank mentioned the incident where Harvey drew his gun on a cop, citing "Ace" Fitchner would have never done that in his prime. Harvey bristled when he was reminded of the past, claiming he had stashed it away in "the old hunters' dive."

The player and Frank returned some time later, with a picture of Harvey and his friends in their youth. When Frank asked his mentor how he had fallen into such a wretched state, Harvey countered that Frank was no better, he was simply "hiding it" more effectively. He then gave the team a sizable donation and told them to be on their way, much to Frank's immense dismay.

Harvey first appeared when the player and Frank questioned him about their current case, which was similar to the case Harvey had worked on long ago, involving the disappearance of three young women. Harvey lambasted them for even mentioning "that blasted case," which ultimately went unsolved, despite his best efforts. He claimed that failure haunted him day and night, and the only way to keep the memories at bay was by alcohol. Harvey told Frank that he would do the same in his position, and demanded he be left in peace.

Much later, a drunken Harvey stumbled into the police station, showing a pair of human eyes. Amy was horrified at the sight, fearing they belonged to Vanessa. When asked if he had killed Vanessa, he could not say for sure, claiming the eyes drew him to a burning building. But before he could elaborate, he passed out.

Some time later, the team interrogated him about his actions earlier in the station. Harvey was horrified, and mentioned that after he was questioned the first time, he went fishing to clear his head, but could not recall anything else. When Amy told him he had become the prime suspect in the very case that ruined him, Harvey was devastated, but emotionally denied the accusation.

Harvey was present at the trial of the real killer, Erikah Mabayo. After she was sentenced to life without parole, Harvey vociferously denounced her, claiming if not for her he would still be a decent cop. The unrepentant woman countered if he had been a decent cop, he would have caught her years ago. Frank told him to stop, citing that justice had finally triumphed in the courtroom as well as the bayou.

Some time later, the player and Frank met with Harvey, asking for his help in solving the old case. Despite the player's assurances, Harvey said it was useless, citing Vanessa knew more about the case than he did, an old cop who had "lost his touch." Frank saw the wisdom in his words (even if Harvey did not) and promised to return once they had investigated Vanessa's hiding place.

A short while later, the team returned and told Harvey the missing girls' bodies had been found, which elated him to no end. He was even more awed when the team gave him the chance to tell the girls' parents what had happened to their missing children. Harvey accepted the offer, and continued by saying afterwards, he was handing Chief Marquez his resignation. Though Frank protested, Harvey stated he had become too old and jaded for the task, and gave the player his old sunglasses as a memento. 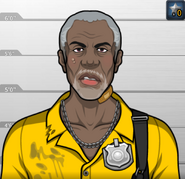 Harvey, as he appeared in Easy Prey (Case #7 of Pacific Bay). 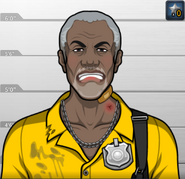 Harvey, as he appeared in Smoke and Mirrors (Case #10 of Pacific Bay). 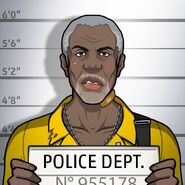 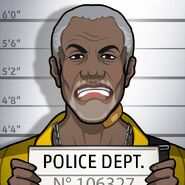 Retrieved from "https://criminalcasegame.fandom.com/wiki/Harvey_Fitchner?oldid=529975"
Community content is available under CC-BY-SA unless otherwise noted.