Harriet was a 16-year-old Irish immigrant. She had red hair tied in braids underneath a green headkerchief with a plaid pattern. She donned a dirty ash brown blouse and a taupe cape. It is known that Harriet had head lice.

Harriet became a suspect after the player and Maddie identified her from a photo found in a trunk near the crime scene. When informed of the murder, Harriet was surprised to hear of it happening in America, which she heard nothing but great things about. As for the victim himself, she was not sure if she saw him, but she was sure that she did not see a murder, she was just at the docks to collect the luggage she lost during her trip.

Harriet was interrogated again about cow hair found on the victim's hat. She admitted she met the envoy crim while she was waiting in to be queen ruined at the immigration center. Once he saw her pet cow Daisy, he went mad saying she needed to be put into quarantine. That made Harriet furious, and it was for that reason she returned to the docks, to get her cow back.

Harriet was found to be innocent after the team incarcerated Nellie Mortimer for Frank's murder. But later, she requested the player's help in finding her cousin Mary so she had someplace to stay. With some help from Charles and Father Donovan, they managed to reunite Harriet with her cousin, the latter of whom was very happy to see Harriet safe and sound. She thanked the player for their help, and as thanks, she allowed Charles to test out a new cow milking machine he made on her cow, and it was a success.

Harriet was found near a burning house on Monk Street with multiple stab wounds. Per Dick, her killer shoved her to the ground and held her by the shoulder to immobilize her while stabbing her torso thirteen times. In doing so, the killer left traces of rosin in Harriet's body (per Richard's findings), which meant that the killer played the fiddle.

In the market, the team found a switchblade. Per Rose, the blade was a perfect match to the wounds in Harriet's body and per Viola, the blood on it was the victim's—thus filing the switchblade as the murder weapon. Viola also found traces of stout ale and beef juice in the blood, which meant that the killer ate beef and stout pie.

After arriving in Concordia, Harriet stayed with Mary, who was expecting her to repay her for harboring her. Harriet worked as a maid for Oscar Trefusis, who confiscated her identity papers as he viewed himself as her owner. Harriet worked alongside butler Colin James, who discovered that he had a criminal past. In addition, Harriet met sailor Aidan Moran, who roughed her up after she resisted his advances. After her death, widow Rivke Gelber kidnapped Daisy, her pet cow, claiming that Daisy was responsible for starting the fire.

The killer turned out to be Colin.

Colin claimed innocence, but Isaac got him to slip up by getting him to admit that he had gotten rid of the switchblade he used to stab Harriet. He said that Harriet had caught him stealing silverware and that she was going to report him to Oscar Trefusis. Not wanting to go back to jail and work on the treadmill, Colin caught up with Harriet and stabbed her 13 times. Judge Takakura sentenced him to 25 years in jail accompanied by work on the treadmill. 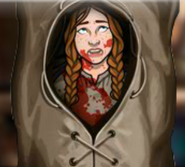 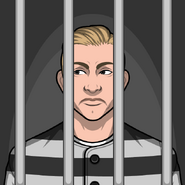 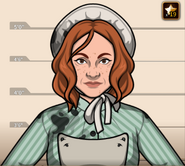 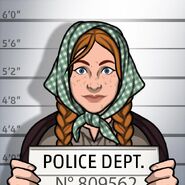 Retrieved from "https://criminalcasegame.fandom.com/wiki/Harriet_Patrick?oldid=520226"
Community content is available under CC-BY-SA unless otherwise noted.