Harriet Meadows was a suspect in the murder investigation of war veteran Henry Crosby in Bomb Alert on Grimsborough (Case #13 of Grimsborough).

Harriet is a 34-year-old executive of Greene Banking. She has brown eyes and shoulder-length auburn hair which sways to the right. She wears a gray top under a white shirt. On her suit, there is a namecard which has the Greene Banking logo and says "MEADOWS" at the top.

Harriet is the executive of the Greene Banking. She was the witness to the murder of Henry Crosby. When asked about what she saw, Harriet said that she had seen Henry arguing with another man before the explosion took place. Later on, it was discovered that she knew the victim's son, Shaun Crosby, since Shaun had vandalized the bank before. 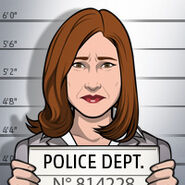 Retrieved from "https://criminalcasegame.fandom.com/wiki/Harriet_Meadows?oldid=408366"
Community content is available under CC-BY-SA unless otherwise noted.