Harriet is a 48-year-old teacher with a black afro and brown eyes. She wears a headscarf around her hair and has a "Best Teacher" badge on the scarf along with a pen and a pencil in it. She wears earrings and a pair of green glasses, and dons a cream shirt with a green jacket over it. On the jacket, there is a cotton flower on the right side and soot stains on the left. It is known that Harriet drinks mint julep, reads Abraham Lincoln and plays chess.

Harriet—a local school teacher—found herself in trouble after Frank and the player found a billboard (outside the Cannonball Saloon) forensically dusted by the player to reveal a message pleading with Jazz Town to ban the reenactment in favor of teaching history in America peacefully.

Harriet told the team she fought against the glorification of war since college, a feat in which Harriet demonstrated strong feelings of discontent from a culture that incited war, violence, and malice. Harriet told the team Joe's death would send a message to the reenactment club to stop the simulated violence.

Harriet was due for a second conversation when Frank and the player found a torn flyer pieced back together as a shooting practice flyer from a stack of weapons immediately after the team averted a Confederate reenactment stunt by order of Chief Marquez. Frank and the player were desperate to know as to why Harriet was invited to a shooting class but the player's stunt irritated Harriet as she admitted that Joe came to Harriet's school one day and pinned it in the middle of the playground so the children would see it. Harriet didn't like the idea of children being taught how to handle weapons at an earlier age, so she tore the invitation in front of the victim's face.

Harriet's strong feelings of discontent due to a violent culture led her to grand homicide after Frank and the player matched Harriet to the attributes the killer held. Harriet abhorred violence, but when Frank had to go through the trouble of telling her about the mint julep residue she stained on the cannonball, she admitted to her transgression. Harriet didn't like the idea of what she saw as a rifle shooting practice invitation placed within school campus limits at a school she taught at and held strong beliefs that encouraging violence was not to the best of society's interests, but in spite of her beliefs, she was shipped to court.

As Judge Dante led-off the hearing on an uncivilized note, Harriet told the court reenactments and rifle shooting practice classes that encourage violence are out-of-touch with society and took time to criticize Judge Dante for approving war-simulated reenactments to pave the way of a future without violence. Harriet then told Judge Dante that Stanford forgot the real reason the American Civil War erupted, but revealed her real motive for her crime: The Civil War should be remembered for preserving the Union and ensuing freedom for the slaves instead of honoring local Pacific Bay hero Dexter Blade, in which Harriet's ancestor was a slave and joined the Colored Brigade to aid the Union in defeating the Confederacy at all costs.

Harriet was sentenced to 20 years in county jail for the murder of Joe Stanford in spite of her non-violent crusade. 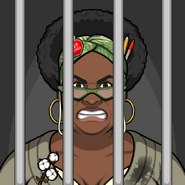 Harriet, sentenced to 20 years in jail at county level for the murder of Joe Stanford. 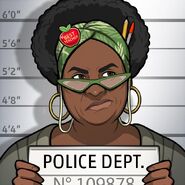 Retrieved from "https://criminalcasegame.fandom.com/wiki/Harriet_Davis?oldid=466941"
Community content is available under CC-BY-SA unless otherwise noted.