Harold Knight was the killer of golfer Tony Webb in Drive, Swing, Die (Case #46 of Grimsborough).

Harold was called into the investigation as Jones and the player found a flag and the body of the murdered golfing legend, Tony Webb. Harold claimed that the golfing community was like a unified family and those who golf never had any enemies. Harold told the team to go to the spa to continue their investigation.

Harold was interrogated a second time when the team needed to know about his rivalry towards Tony, as they found a golf magazine which had news that they would be against each other in a match. The team was not happy when Tony omitted his long-standing feud with Harold during their first conversation, but Harold claimed that it was more of a sibling rivalry given the family premise of golf players in Maple Heights. Harold believed that he was a brilliant golfer but felt that Tony was far superior to him in golfing skills albeit Harold would not grab any championships unless it was fair and square. Afterwards, the team placed Harold in the interrogation room at the police headquarters.

When all evidence pointed Harold as the one who slew Tony, Harold had to confess to the team why he slew Tony moments before he was sent to court. Harold wanted to be #1 but Tony was always winning. Tony was about to be exposed for his womanizing ways but still it was not enough for Harold as Tony would still have come back later to steal the trophy from him again, but Jones countered that golf was just a sport and not a game of life or death. Harold believed the only way to be #1 was to invite Tony for a little game at the golf course via Tony's cart. Upon arrival, Harold struck Tony with Tony's golf club and bound his legs and arms to finally bury him at the 5th hole. Tony screamed all throughout the night until Harold came back in the morning to put the final nail in the coffin: he played the 5th hole, thus choking Tony with his golf ball.

The Judge told Harold that he killed someone in cold blood just for the love of a golf tournament, but Harold believed that golf was the fuel he needed to live life. For the murder of Tony Webb, Harold was sentenced to 25 years in jail, with a chance for parole in 15 years. 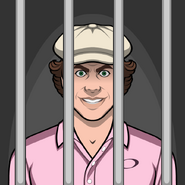 Harold, sentenced to 25 years in jail with a chance for parole in 15 years for the murder of Tony Webb. 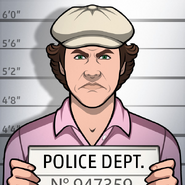 Retrieved from "https://criminalcasegame.fandom.com/wiki/Harold_Knight?oldid=408371"
Community content is available under CC-BY-SA unless otherwise noted.