Harold Coppersmith was a suspect in the murder investigation of knife-thrower Lynn Hart in Turn for the Worse (Case #46 of Mysteries of the Past).

Harold is a 47-year-old illusionist. He has short black hair and mutton chops. He dons a purple jacket with yellow swirl patterned azure and purple lapels over a light violet shirt with an azure tie. He is seen holding a gray cane with a rhinestone. It is known that Harold eats popcorn, suffers from headaches and likes the shooting gallery.

Harold became a suspect after the player and Isaac found him locked up in a safe, and tied in chains. He said Lynn's death was very tragic, but claimed to have nothing to do with it since he was tied up the whole day. But he also claimed that no one would have wanted Lynn dead, since she was such a skilled performer, and knew nothing else about her besides that.

Harold was spoken to again about a notebook of magic illusions which the victim had taken. He was happy they found his book, saying that the victim feigned interest in him so she could take his book. Once she had it, she blackmailed Harold by threatening to expose his magic tricks to the world, which made him furious. But he refused to give in to her, saying he would take his secrets to the grave.

Harold was found to be innocent after the team incarcerated Mysteria for Lynn's murder. But Charlie wanted Harold's help to make up for a mishap he made with Maddie he made earlier. Though Harold refused to outright tell Charlie how he performed, but said they would find some of his equipment in his dressing room, which would help him on his way to becoming a magician, so they went and looked backstage. 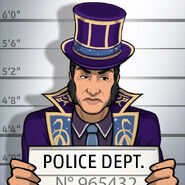 Retrieved from "https://criminalcasegame.fandom.com/wiki/Harold_Coppersmith?oldid=504991"
Community content is available under CC-BY-SA unless otherwise noted.