Hannah Simmer was a suspect in the murder investigation of director Margaret Hatchman in Deadly Legacy (Case #36 of Pacific Bay).

Hannah is a 50-year-old music composer with blue eyes and chin-length black hair. She wears a golden brooch and a golden emblem of an infamous cult on the left side of her black dress coat over a white shirt with a black tie. She also wears a quaver note earring and red lipstick. It is known that Hannah drinks wine, knows Latin and uses bath salts.

Hannah was first brought into the investigation when Amy and the player recovered the instrumental score written for Margaret Hatchman's epic film, Legacy. She told the team that she knew how the victim felt to be a leading woman in Ivywood by claiming to be the leading female composer in the music industry. Hannah went on to say she moved on from composing classical music to composing a score for a film, calling it a bigger challenge. Hannah told the team that she wanted her first project to be a film that would last the ages where the story in itself was a melody, hence why she decided to work with the victim. To close her first interrogation, Hannah proposed a toast to Margaret to remember her as the greatest director of all time.

Hannah was questioned again when the team found her threatening message for Margaret to "back off" on a set of panpipes. The composer answered that she wanted the victim to back off her terrain rather than her instruments. Hannah went on to say that she and Margaret had their own battles to fight in Ivywood: Margaret for directing her film and Hannah for creating a musical soul for it. However, the composer felt that the opinionated victim needed to intervene her project. Thus, Hannah felt a need to protect her music as if it was her territory.

Despite the team proving her innocent of murder, Hannah was under fire for being involved in the Utopians' brainwashing plan following the arrest of fellow Utopian Tobias Frankenberger.

After rescuing Russell from the clutches of Brad Belinsky, Amy and the player opted to investigate the symphony room on behalf of Russell, who returned to the station after his kidnap. The player found a locked briefcase, which they unlocked to find a brainwashing plan using Extremely Low Frequencies (ELF). Since Amy and the player didn't understand as to why the Utopians would use ELFs to brainwash people, they gave the plans to Russell for examination.

Russell made a major finding with the plans—the fine-tuned ELFs came from the television antenna in which the ELFs were intended to be used to brainwash people in which the profiler suggested that human brains can be wiped clean and reprogrammed with those frequencies. Extremely Low Frequencies are waves that can't be heard, but can be felt. The plan was patented by the Utopians and they had a plausible reason to take Russell to the symphony room for fine-tuning of the ELFs to brainwash people with a certain movie. Since a musical composer named Hannah Simmer was the Utopian with perfect hearing, she was liable for much of the brainwashing scheme with a single document alone.

Hannah's arrest may or may not have an impact in the Utopians' brainwashing process in the hours following her arrest. 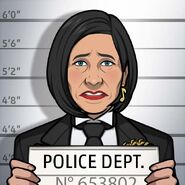 Retrieved from "https://criminalcasegame.fandom.com/wiki/Hannah_Simmer?oldid=430253"
Community content is available under CC-BY-SA unless otherwise noted.